HomeWeekendBoasting of art and mesmerising architecture, Baku beckons as soon as you step on its land

Boasting of art and mesmerising architecture, Baku beckons as soon as you step on its land

From the moment I land at the stunning Hyder Aliyev Airport, I’m bewitched by Baku

Baku is peppered with beautiful mosques |
Follow us on

From the moment I land at the stunning Hyder Aliyev Airport, I’m bewitched by Baku. Exquisite architecture, wide, open roads, leafy parks, bustling restaurants, charming people, and the UNESCO World Heritage Site of its ‘Old City’... What’s not to love? As the capital city of Azerbaijan, also known as ‘The Land of Fire’, Baku is a remarkable showcase of a country that straddles the East and West, blending dramatic landscapes with charming medieval towns, the old with the new, and a syncretic culture that draws influences from Turkey, Russia, and Iran.

As I stroll along the city’s cobblestoned pavements, soaking in eye-pleasing architecture, my guide Habil informs me that Baku nestles 28 meters below sea level. “It is the world’s lowest-lying national capital city and also the largest city on the Caspian Sea and the Caucasus region,” he explained. Also known as the ‘The Windy City’, Baku’s tempestuous weather is determined largely by the warm Gilavar blowing in from the south and the cool Khazri sweeping down from the north. I get first-hand experience of the wind’s elemental fury walking along Baku Bay. My hair and clothes get whipped by wind so strong that I have to struggle to keep my dress down a la Marilyn Monroe! 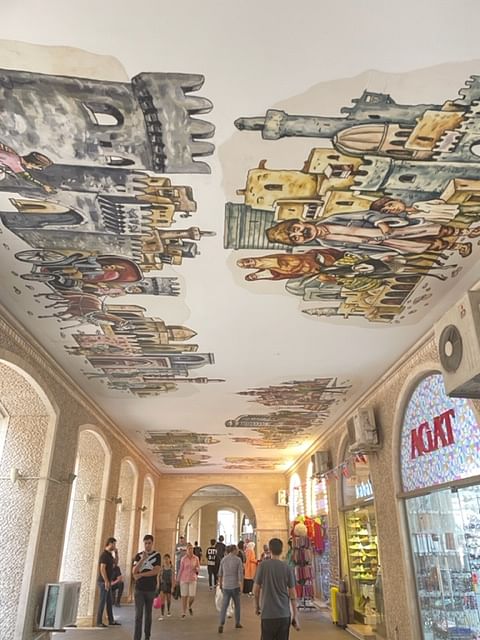 Even so, Baku Bay or the Boulevard is an ideal escape from the city’s whirligig. Peppered with beautiful foliage and manicured spaces, it overlooks the glutinous Caspian Sea. Going up in the vertiginous Baku Eye offers me a panoramic sweep of the city from a height of 200 feet. The 30 cabin of the Ferris Wheel can each hold eight people while taking 15 minutes to complete a heart-stopping ride, which costs Rs 400. To extend my picnic, I next take a fun-filled ride on a gondola that floats along the canals of Little Venice near the bay.

The formidable Flame Towers rise high above Baku like a benediction, their teal glassy façade extending visitors a warm invitation to the ‘Land of Fire’. Located on a hill overlooking the Caspian Sea, this trio of iconic buildings is also what makes Baku’s skyline so distinct. “The city’s history of fire worship, natural gas resources and recent reputation as a technology hub, inspired the design of these sleek, flame-shaped towers,” Habil informed. 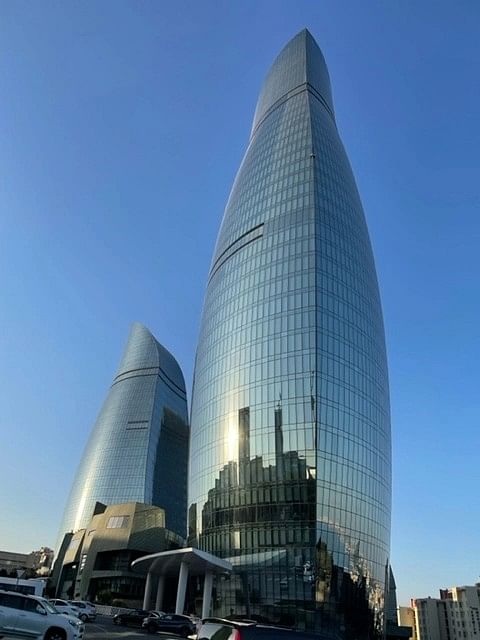 Baku is also a museum lovers’ paradise. Azerbaijan’s UNESCO-listed carpet art history is showcased within the Carpet Museum, housed in an eye-catching building shaped like a rolled up carpet. Holding the world’s largest collection of carpets (over 6,000), it represents all the seven schools of Azerbaijani carpet weaving. At the Surakhani Ship Museum, I explore the exhibits of the world’s first oil tanker museum while the Yarat Contemporary Art Centre and the Museum of Azerbaijani Paintings offer me a deep dive into Azerbaijani art. The stunning Hyder Aliyev Center, designed by the late Iraqi-British architect Zaha Hadid, is the pivot around which Baku flows. A visual treat with its curvy architecture and sinuous lines, it reflects the city’s exponential growth since oil-drilling began in the 19th century.

The centre also regularly hosts world-class exhibitions. The last time I was here in 2019, it was showcasing legendary Russian artist Zurab Tsereteli’s works. Bulgarian gallerist and curator Stephan Stoyanov, who curated that exhibition, says that he chose Hyder Aliyev Center because “it is more than an art venue”. It is the perfect forum to showcase important works, he iterated, as it is a “symbol of an inclusive, secular and a culturally rich country that embraces visitors and rewards talent.” The fiercely modern architecture of the Heydar Aliyev Center contrasts sharply with the cobbled streets and 12th-century fortresses and minarets of the Old City. Also known as ‘Icherisheher’, the city rises from the south shore of the Apsheron Peninsular at the western edge of the Caspian Sea.

I amble along the Old City’s labyrinthine lanes studded with artist’s workshops, cafés, ancient residences, mosques and heritage structures like the 15th century Shirvanshahs Palace described by UNESCO as ‘of the pearls of Azerbaijan’s architecture’. Tree art, graffiti and local handmade handicrafts, carpets and shawls prepared by the local Azeri artists are also on display. Atmospheric restaurants and traditional tea offer tasty treats including the unctuous baklava, lamb dishes with meat falling off the bone, ‘tendir’ (tandoor) bread and the ambrosial Azerbaijani tea. The Maiden Tower looms over the Old City like a sentinel. A tall, mysterious and cylindrical eight-story structure, it is also Baku’s symbol and displayed on its currency -- manat. Legend has it that an ancient king’s daughter jumped off the tower’s top to escape a forcibly fixed royal marriage, and hence its moniker.

Different versions of this story have found their way into poems, plays and fairytales, enchanting visitors with a fascinating tale about a fascinating country. 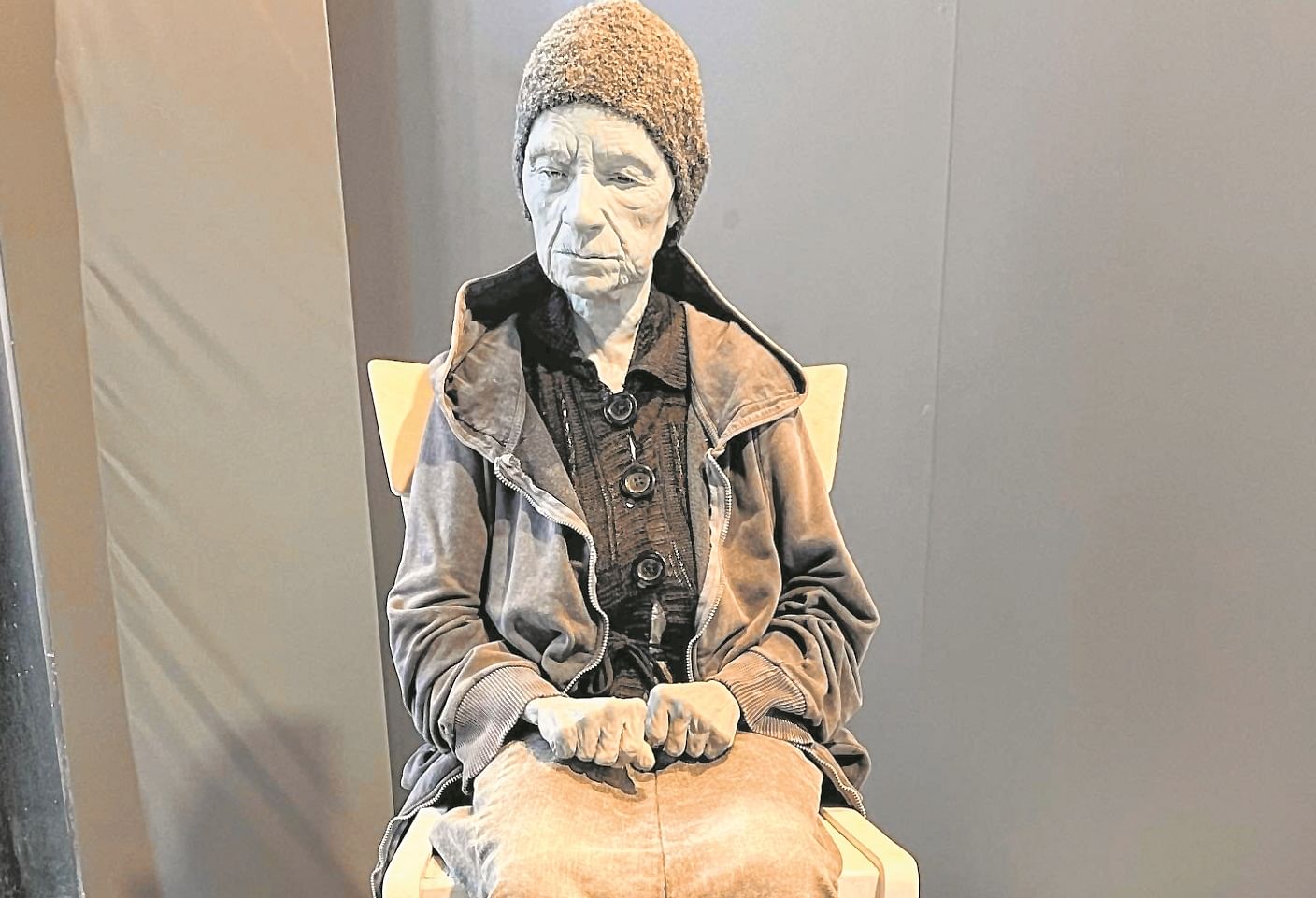