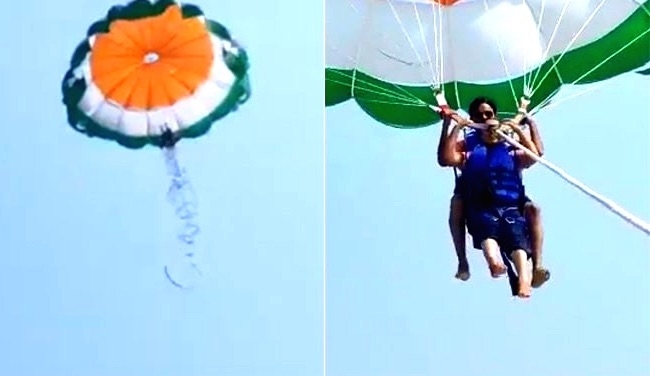 A man and his wife were left shocked after the rope of their parachute snapped while they were on a vacation, parasailing off the coast of Diu.

The accident that took place mid-air was captured on camera after which it went viral on various social media platforms.

Ajit Kathad and his wife Sarla Kathad were parasailing off the Nagoa beach in Diu on Sunday when the rope of their parachute broke, sending them plummeting into the water, as per reports by the Times of India.

They were fortunate to avoid injury as they were wearing life jackets and were quickly rescued by beach lifeguards.

The line connecting the couple's parachute to a powerboat snapped just a minute into their parasailing journey, leaving them unsecured.

Have a look at the footage here:

As the couple fell into the sea, Ajit Kathad's older brother Rakesh, who was aboard the powerboat, was heard screaming. Lifeguards from Palms Adventure and Motorsports, the private company that provides the parasailing service, eventually rescued the pair. Rakesh later informed reporters that he had told operators that the parachute line was torn and worn out. He was told, however, that nothing would happen and that the rope's damaged section would not even make it to the air. Meanwhile, the proprietor of Palms Adventure and Motorsports blamed the unfortunate event on strong winds.

The couple later went to the police station to submit a complaint, but left without doing so as they were still in shock.