With rain affecting several parts of Southern India, a video of bikers balancing to escape being swept away by the floods resulted in the city streets goes viral on the internet.
FPJ Web Desk 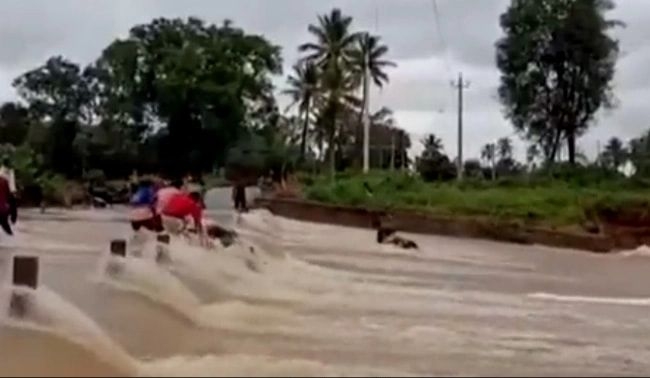 A biker had a narrow escape after he was swept away while crossing a flooded street in Karnataka's Tumakuru.

In a 57-second clip, shared by News agency ANI, several people can be seen balancing themselves and holding out against the strong currents on the flooded Karnataka's Tumkuru road. Against the force of currents, a man is trying to pull in the biker but he slips away. The man, along with his motorcycle, floats around for a bit but then safely emerges on the other side.

The video shows people crossing the heavily flooded road with their two-wheelers, with another motorcycle seen being swept failing the local's try to stop it.

#WATCH | Karnataka: A biker had a narrow escape after he swept away while crossing a flooded road in Tumakuru pic.twitter.com/qbNqefsBnD

According to NDTV, Thursday saw heavy rain in the capital city of Bengaluru. Schools in Bengaluru Urban and in some other districts in south interior Karnataka were closed due to heavy rainfall forecast.