Tourist attacked by 12-feet crocodile while clicking selfie with it

A tourist had a narrow escape to death after he stood close to a crocodile to take a selfie, presuming the predator was fake.
FPJ Web Desk 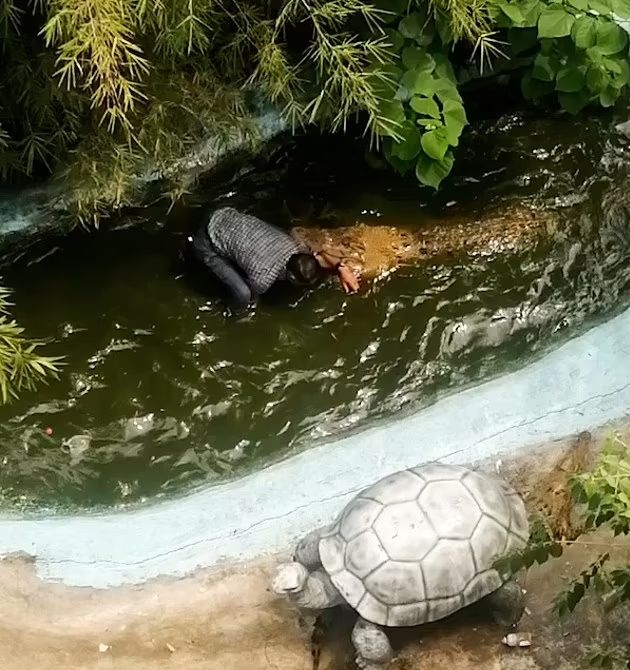 A tourist in the Philippines had the best of his fortune to be alive after he was attacked by a crocodile that he mistook for as a plastic statue.

According to The Mirror, the incident occurred while Nehemias Chipada, 68, was visiting the Amaya View amusement park in Cagayan de Oro City, the Philippines, on November 10.

In the video captured by onlooker Rogelio Pamisa Antiga, the elderly is seen screening for having jumped into the predator's space, with his hand attacked by the mouth of the 12-Foot Crocodile. The visuals are disturbing and horrifying as it screens the crocodile's attempt to drag the man under the water and start a death roll - the usual way the reptile kills its prey.

Here's the video, take a watch:

According to the Daily Mail, Nehemias Chipada was rushed to the hospital, where he received surgery on his left arm. Mr Chipada is recovering from the attack at Northern Mindanao Medical Center. The Chipada family has blamed lack of warning signs around the amusement park for the incident.

Amaya View Chief Operating Officer Candy Unabia denied the allegations that stated the park or officlas of being negligent. 'They said they thought the crocodile was also artificial, but that area is actually restricted. There are signages and constant reminders from our tour guides,' he was quoted as saying by the Daily mail.