India won the match against Hong Kong in Asia Cup 2022 on Wednesday at the Dubai International Stadium. After the match, a lovely moment won everyone's hearts as Hong Kong batter Kinchit Shah got down on one knee and proposed to his girlfriend.

Sports players love blossoms on sport fields |
Follow us on

Hong Kong suffered a 40-run defeat in their opening match against India in Asia Cup 2022 on Wednesday at the Dubai International Stadium.

After the match, a lovely moment won everyone's hearts as Hong Kong batter Kinchit Shah got down on knee and proposed to his girlfriend at the stadium. His partner didn't disappoint the cricketer. The duo then hugged to start a new chapter in their lives.

Kinchit Shah is a Mumbai-born vice-captain, left-handed batsman and a right-arm offbreak bowler and a wicketkeeper too. Shah has been a regular member of the Hong Kong T20 squad.

She said YES! 😍💍
A heartwarming moment where Hong Kong's @shah_kinchit95 proposed to his SO after playing a big match against India 🥰
A huge congratulations to the happy couple. We wish you all the joy and happiness in your new life together ❤️#AsiaCup2022 #GetReadyForEpic pic.twitter.com/CFypYMaPxj

Many sports players have been bold enough to express their love openly in the public and impressed their partners.

Take a look at some of these below:

Earlier too, Deepak Chahar, an Indian cricketer, also a part of the Chennai Super Kings proposed to his girlfriend, Jaya Bhardwaj in the stands after the end of their IPL 2021 match against Punjab Kings in Dubai. The moment was captured by TV cameras and his partner was happy with the pleasant surprise.

She happily said yes to the cricketer and the couple celebrated the occasion with a warm hug and even the people around cheered for them.

The video of the same was tweeted by Deepak Chahar with the caption: Special and one of the best moment of my life #love.

Special and one of the best moment of my life #love pic.twitter.com/jsCEhiAUZY

Royal Challengers Bangalore (RCB) ex-player Sachin Baby in 2016 had proposed to his lady love Anna Chandy after dating her for 1.5 years and the video went viral video that ends with the trademark IPL Trumphet sound. The couple even dressed up in colours of the RCB team.

Love isn't country or region specific nor it is resticted to a particular sports. Other sports players were also proposed by their partners, take a look:

Amanda Jade Wellington, an Australian cricketer was surprised by her partner with a marriage proposal after a 6-wicket victory over Melbourne Renegades in October 2019. Amanda Jade Wellington, an Australian cricketer was proposed by her partner |

In 2016 Rugby Final, Brazilian player Isadora Celluro was asked in marriage by manager Marjorie Enya after the final match. American Footballer Hassani Dotson Stephenson proposed to his girlfriend in July in 2021 in the presence of stadium-packed fans. After a match against San Jose Earthquake, Hassani went down on his knees with a ring to propose.

His partner Petra Vukovic affirmed the proposal and the whole stadium cherished the romantic moment. 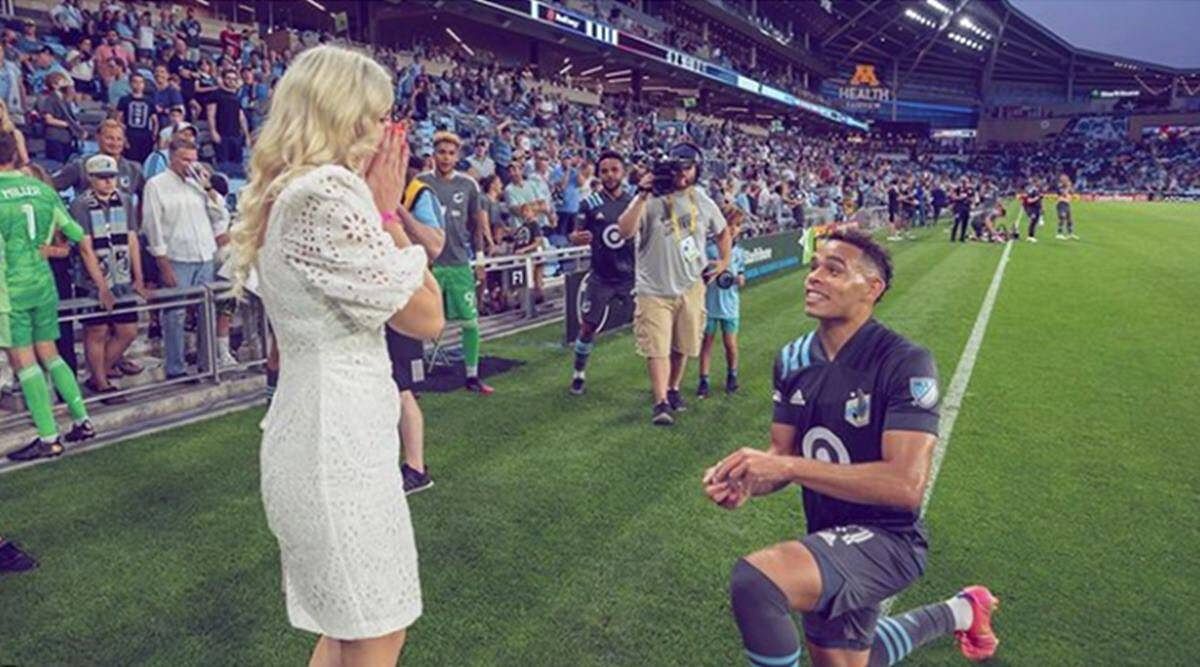