HomeSportsWhen Pele was left mesmerised in Kolkata, the 'football capital' of India

When Pele was left mesmerised in Kolkata, the 'football capital' of India

Pele was overwhelmed by the depth of talent a "little known" Indian club possessed when he played against Mohun Bagan in 1977.

Pele was overwhelmed by the depth of talent a "little known" Indian club possessed when he played against Mohun Bagan in 1977.

Much before Diego Maradona's 'Hand of God' moment stirred the football passion in the region, it was the Brazilian maestro Pele who began Bengal's tryst with the 'beautiful game'.

Playing against Mohun Bagan on a slushy and jam-packed Eden Gardens on September 24, 1977 in the twilight of his career, the three-time World Cup winner was overwhelmed by the depth of talent a "little known" Indian club possessed.

Desperately seeking a revival after the dominance of arch-rivals East Bengal, the PK Banerjee-coached Mariners not only stopped the 'King of Football' from scoring a goal, but almost won 2-1 before a controversial penalty made it a 2-2 draw against the star-studded New York Cosmos.

PK had given mid-fielder Gautam Sarkar the big task of man-marking Pele and playing in the dream match of his life, he had given it all, something that was later acknowledged by the legend himself.

In the evening, Mohun Bagan had organised a felicitation ceremony for Pele where he was to be handed a diamond ring but the 'Black Pearl' was more interested in meeting the players first.

Goalkeeper Shibaji Banerjee was the first one in the list.

When the name of the sixth player was announced, Pele, surrounded by a galaxy of people, came out of the barricade and hugged the player.

"Sporting a wry smile he told me, 'So, you are that number 14 who did not allow me to move...' I was left awe-struck," Sarkar remembered that evening vividly, even after 45 years.

"Chunida (Chuni Goswami) was there standing beside me on the dias and heard all this. He soon told me: 'Gautam you now give up football -- what's there to achieve after hearing this compliment'. Indeed, this was the biggest achievement of my football career.

"I don't want to boast about myself, but according to a newspaper report my photo is still hanging in the New York Cosmos club. He was so overwhelmed by our play that he wanted to meet the players first. Never thought a club team from a country like India would play like this."

The exhibition match could see the light of the day because of the initiative of Dhiren Dey, a revered football administrator in Kolkata Maidan, then at the helm of Mohun Bagan as the general secretary.

"It seemed unreal when Dhirenda told us that Pele would play against us. We all told him to 'stop lying, it's unbelievable'. But as days passed and we got to know about it, we all had sleepless nights," Sarkar told PTI.

Preparation began three weeks in advance and Mohun Bagan had to prove a point.

"The prospect of playing against Pele was one of the reasons why I moved from East Bengal to Mohun Bagan. As it happened, it all changed our club's fortune," Shyam Thapa who famously gave Mohun Bagan the lead said.

Four days later, Mohun Bagan were to play against East Bengal in the coveted IFA Shield final and as it turned out, the Mariners won 1-0, ending their arch-rivals' title- winning streak.

"It was a platform for us to revive our fortunes. The result gave us much-needed confidence to face East Bengal. We found our mojo back," well-known Mohun Bagan defender Subrata Bhattacharya remembered.

They continued their revival as they went on to win the Rovers Cup and Durand Cup.

"We wanted to give everything in the field. The match helped us grow as a team," said then Mohun Bagan midfielder Prasun Banerjee, now a TMC member of Parliament.

The best chance for Pele to score came off a free-kick from the top of the box. The ball rose and spun in towards the left upright before being saved by a diving Shibaji Banerjee. Pele revisited the city seven years back during the festive season of Durga Puja, this time with a walking stick but his aura had left everyone mesmerised, including the city's cricket icon Sourav Ganguly, a self-proclaimed Brazil fan.

"I've played three World Cups. There's a big difference between being a winner and a runner-up. To hold that World Cup and a few Golden Boots must be phenomenal," Ganguly said in awe of the great man in the felicitation ceremony at the Netaji Indoor Stadium.

Pele also reunited with the Mohun Bagan batch of 1977 including the legendary PK, Subhash Bhowmick and Shibaji Banerjee who are no more. 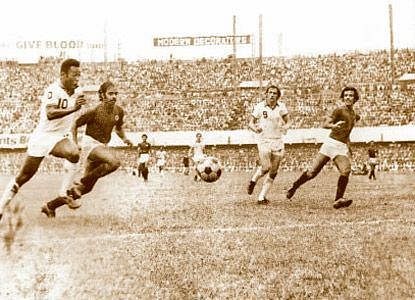 "I accepted to come here in India because I love the people here," Pele said.

The King of Football also had his sense of humour intact and gave a cheeky reply when someone in the dias asked him if there could be another Pele.

Listen to the latest songs, only on JioSaavn.com

"Listen, I'm sorry. My father and my mother closed the machine. There will be no other Pele." His last words before signing off were: "If I can help someway, I'll be here again."