Chaos unfolded in the streets of Buenos Aires, Argentina, as the World Cup champions held their victory parade -- and things got so out of control, players had to be evacuated from their celebration by helicopters

Victory celebrations of the World Cup winning Argentina team were marred by the death of a 24 year old fan as celebratory chaos reigned the streets of Buenos Aires.

Some 4 million people came out to see the victory parade in the capital, state media agency Télam reported.  Tuesday had been declared a national holiday following the team’s thrilling penalty shootout victory over France in Qatar on Sunday.

The bus carrying the entire team was meant to make its way to the Obelisk, a historic monument in the center of Buenos Aires, but was not able to progress due to the swarming crowds, Claudio ‘Chiqui’ Tapia, the president of the Argentine Football Association said Tuesday.

The victory parade was cut short after fans jumped onto the top of the bus carrying the players. Lionel Messi and his World Cup winning team had to be evacuated by a helicopter after fans threw projectiles and tried to jump on to the bus.

One clip appeared to show a fan landing among the players, with a second attempting to follow suit only to fall backwards off the back of the bus and into the crowd.

The Argentine players were meant to travel on the bus from the AFA training facilities to the Obelisk. The AFA later confirmed a change of plans on the advice of security advisors to switch to helicopters.

A statement from AFA president, Claudio Tapia, indicated the squad were upset not to continue their journey as intended, rather than spooked by events on the route. “They do not let us arrive to greet all the people who were in the Obelisk, the same security agencies that escorted us do not allow us to move forward,” said Tapia. “A thousand apologies on behalf of all the champion players. A pity.”

The World champions touched down during the early hours of Tuesday where despite it being around 3am local time, thousands were waiting with banners, flags and flares, and howling in joy after 36 years since the country’s last World Cup victory.

By around midday, millions had already congregated in downtown Buenos Aires, with major roads shut down for the parade. People held up banners of Lionel Messi and the late Diego Maradona, played instruments or climbed lampposts or bus stops. 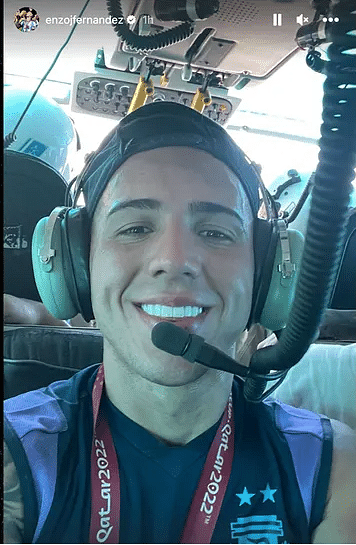 Fans were understandably excited on winning the World Cup and it showed throughout the parade but as the chaos unfolded and the parade was cut short, it was a pity as the much deserved celebrations could have continued