Torrez carrying on the family legacy: Coming from an American boxing family of three generations, he is punching some of the sport's largest men out of the ring 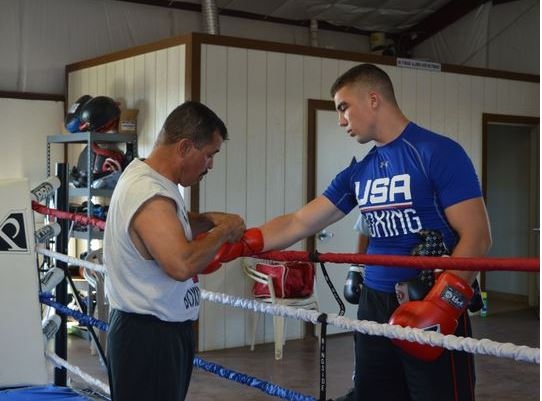 Now, and let’s be clear, this Team USA boxer is by no means small at 188cm and roped through with muscle. But in the super heavyweight division, there are some absolute monsters hiding in the shadows. And they’re eager to take your head clean off.

“These are the biggest of the biggest,” Torrez Jr. told Tokyo 2020 about the Olympic weight class that showcases fighters above 91kg (with no upper limit) who on rough average fight from a height of approximately 194cm. “I’m not the biggest. I’m not the strongest. But going in the ring with one of those huge guys and getting my hand raised at the end of it – that’s a great feeling.”

There’s a twinkle in the 21-year-old’s eye when he talks about taking on the biggest and the baddest from all the corners of the world. It’s in those moments, when he touches gloves with an opponent who towers over him, that all the hard work kicks in.

“It’s definitely nerve-wracking when you have to look up at a guy to touch gloves because he’s close to seven feet tall (212cm) and huge,” chuckled Torrez Jr., a ten-time youth national champion and the number-one ranked American, and third worldwide, in his weight class.

“But then you get back in the corner, and you think about how hard you trained for the fight. You think about all the time and dedication. Everything you sacrificed. Then it just becomes a matter of ‘let’s do this.’”

The secret lies in the training. It’s those hours and hours of grind, for years on end, that keep Torrez Jr. from being torn apart. This is the great motivator of all pugilists. Show up unprepared on, say, the badminton court, you lose your match. Maybe you lose your dignity. But in the boxing ring, you can lose a whole lot more.

Young Torrez Jr. learned that lesson the hard way when he was stretchered out of the ring at the 2019 AIBA world championships in Russia following a devastating punch from the huge Uzbek Bakhodir Jalolov (his country's flag bearer at the Rio 2016 Games and now an undefeated pro). The shot landed clean and saw Torrez Jr. suffer his first career knockout.

Torrez Jr. represents the third generation of a boxing family from California’s San Joaquin Valley. His great grandfather, Juan Torrez, imigrated from Fresnillo Zacatecas, Mexico in 1920. He’s the grandson of Manuel Torrez, a southwest (USA) Golden Gloves champion, and the son of 1984 Olympic trialist Richard Torrez Sr. – who also happens to be his coach.

He’s not so much surrounded by boxing tradition as he is steeped in it.

“It’s never fun going home with the coach, right?” Torrez Jr., who's easy with a smile and chooses his words carefully, laughed about boxing bleeding into life and life bleeding into boxing in his particular arrangement.

The first time Torrez Jr. sparred he was four. He was only eight during his first competition. And the first time he won nationals he was ten. Since then he’s gone on to win a further nine national championships, a Golden Gloves national title in 2017 and a bronze at the Pan-American Games in 2019. He's amassed a sparkling amateur record of 151-10 and 0 and been a member of Team USA for four years.

The last American to win in the weight class at the Olympic Games was Tyrell Biggs back in Los Angeles in 1984, the same year Richard Torrez Sr. fought at trials and the year the super heavyweight division debuted in the Olympic programme.