Torres double sinks Azzurri; Striker scored twice in the first half to send Spain to the final and bring Italy's world-record unbeaten run to an end 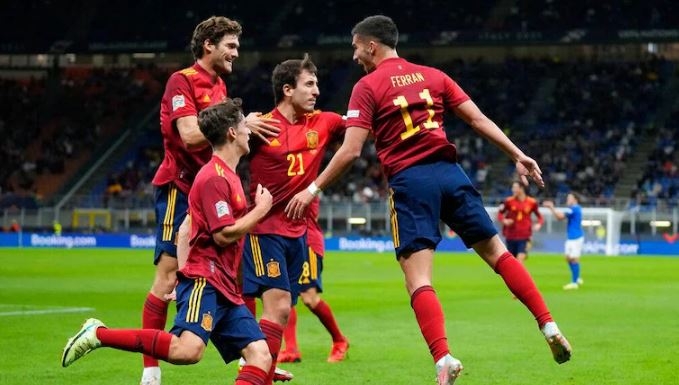 The European champions Italy started brightly enough but from the moment Ferran Torres guided Oyarzabal's delicious 17th-minute left-wing cross in off the far post, their world-record run of 37 matches without defeat was destined to come to its conclusion.

The ten minutes before half-time sealed their fate. First Lorenzo Insigne somehow side-footed Emerson's cross wide with the goal at his mercy, then Leonardo Bonucci was dismissed for a second booking. It got worse on the stroke of half-time as Oyarzabal picked out Ferran Torres again and the Manchester City forward placed his header back past Gianluigi Donnarumma.

Roberto Mancini made a raft of changes but his side rarely threatened to turn the tide until the 83rd minute, when the Azzurri broke from a Spain corner and Federico Chiesa teed up Lorenzo Pellegrini for a tap-in. The home fans sensed a sensational turnaround but La Roja held firm.

"The game played out beautifully for us but that was a match of two rivals going at it hammer and tongs with their best qualities on show. My team looked dangerous throughout, we pressed well and I'm pretty happy," said Luis Enrique, Spain coach.

"We've been playing good for a while now. We are a young team playing well and I think this victory is another step," said Torres, who came off four minutes into the second half after picking up a knock but said he would be fit to play Sunday's final against either world champion France or top-ranked Belgium.

Lorenzo Pellegrini pulled one back for Italy late on as the Azzurri threatened an improbable comeback.

Since 1 September 2020, Ferran Torres has scored 11 goals in 20 internationals – more than double the tally of any other Spain player in that period (Álvaro Morata has five).

Gavi (17 years and 62 days) became the youngest player ever to represent the senior Spain side, taking the record from Ángel Zubieta (17 years and 284 days) that was set in 1936.

Italy's world-record run of 37 matches without defeat (W28 D9) came to an end.

Italy had not conceded more than one goal in any of their last 40 internationals before this game.

This was Italy's first defeat in a competitive match on home soil since they lost 3-2 to Denmark in September 1999.