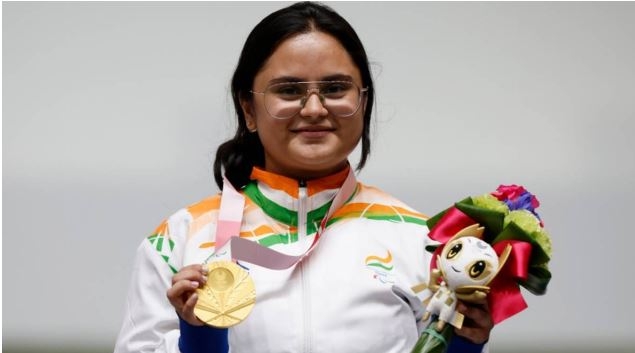 Jaipur: ‘Life consists not in holding good cards, But in playing those cards you hold well'. This is the life mantra of Avani Lekhara who won the first gold medal in the shooting at the Tokyo Paralymics on Monday.

The 19-year-old was was paralysed below the waist in 2012 but she played her cards well and now made her family and country proud.

The Jaipur lass never took part in any sport before her accident and was depressed after that looking to her physical condition. But, now what she has achieved is an inspiration to all, said her delighted grandfather GH Lekhra.

He told that Avani had injuries in the spinal cord and had been in hospital for about three months and undergone surgery on the spinal cord but doctors were of the view that there is no treatment of traumatic paraplegia.

Her father Praveen Lekhra is a senior Rajasthan administrative officer and her mother Shweta is also an officer. Avani is pursuing a law degree from Rajasthan University. Her father told that it was difficult to handle Avani. She was deprived of admission to the school and had to remain at home for two years. Then she got admission to a Kendriya Vidyalaya in Jaipur and her life got back on track a little.

"I took her to a shooting range near our home and she found shots in shooting quite appealing. Then I gave her a biography of renowned shooter Abhinav Bindra that has an inspiration for her and from April 2015, she started going to the shooting range," said her father.

Avani got coaching in Jaipur, Delhi and Mumbai, Panvel continued her practice even in lockdown by arranging targets at home. Her first achievement was in July 2015 when she won gold medal at State level competition and from there on she never looked back but upfront.