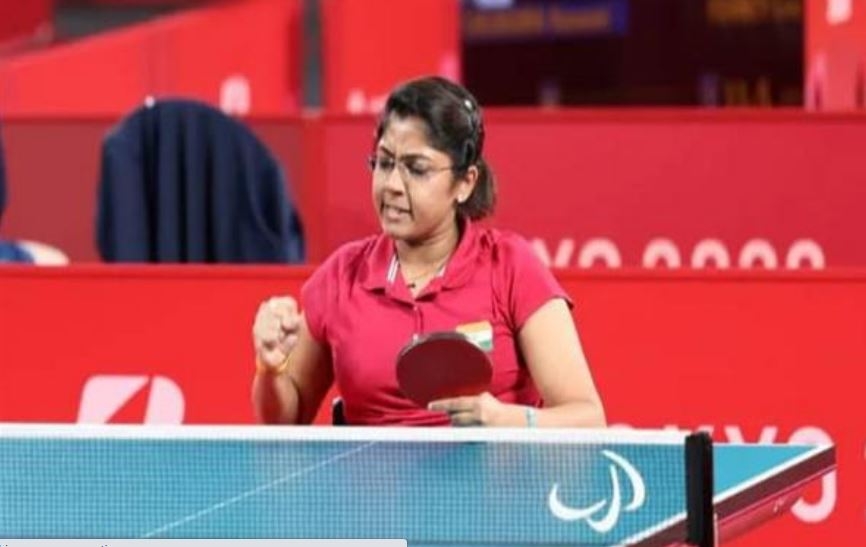 Tokyo: Bhavinaben Patel continued to script history as she became the first Indian to enter the final of a table tennis event in the Paralympics with a hard-fought 3-2 win over China's Miao Zhang in a class 4 semifinal here on Saturday.

The 34-year-old Patel, who had surprised even the Indian camp in this Paralympics with her sensational show, stunned her world no. 3 Chinese opponent 7-11 11-7 11-4 9-11 11-8 in the semifinal showdown that lasted 34 minutes.

She will take on world number one Chinese paddler Ying Zhou in the summit clash on Sunday.

Daughter of Hasmukhbhai Patel, a small time shopkeeper at Sundhiya village in Gujarat's Mehsana district, she was not considered a bright medal prospect coming into the Games but she has made her maiden Paralympics a memorable one.

"When I came here, I just thought that I would give my 100 per cent without thinking of anything. If you give 100 per cent, the medal will come, that was what I thought," said Patel, who was diagnosed with polio when she was 12 months old.

"If I continue with this confidence with the blessings of the people of my country, I think I will win gold tomorrow. I am ready for the final and I have to give 100 per cent in the final also."

Patel, who plays in a wheelchair, lost the opening game in a tight contest. But, she made a strong recovery, claiming the next two games to take a 2-1 lead.

Patel was in great touch as she needed only four minutes to wrap up the third game.

In the fourth game, Zhang showed her class not giving Patel the bragging rights just yet as the match headed into the decider.

In the deciding fifth set, Patel quickly raced to a 5-0 lead. But the Chinese made a strong comeback. Trailing 5-9, Zhang won three successive points to make it 8-9.

In a bid to gather herself, Patel took a time-out after which there was no stopping her. Armed with two match points, she notched up the win, extending her purple patch.

This was Patel's first victory against the former world number one Zhang. The two players had met 11 times before.

Patel will face a tough challenge from Zhou in the gold medal match.