HomeSportsTennis legend Boris Becker reveals chilling details of life in a UK prison, where his life was constantly under threat

Tennis legend Boris Becker reveals chilling details of life in a UK prison, where his life was constantly under threat

Tennis legend Boris Becker has shared chilling details about his hellish time in prison. His painful experience included death threats from murderers and the fear that his life was collapsing.

Becker was imprisoned last April for two and a half years for hiding £2.5m (€2.9m; $3m) of his assets and loans to avoid paying his creditors. He was declared bankrupt in 2017 with debts of almost £50m because of an unpaid loan of more than £3m on his Spanish estate in Majorca.

The 55-year-old sat for a lengthy chat with German TV station Sat TV and gave his first interview since regaining his freedom earlier this month.

The chat also marked the first time the former world number one had been pictured since before he was sentenced in April to two-and-a-half years in jail after being found guilty of four charges under the Insolvency Act.

Becker a six time Grand Slam champion served time in England's Wandsworth Prison. He was then transferred to another facility HMP Huntercombe in May.

In the interview that aired last night the three time Wimbledon champion recalled a number of incidents while he spent time in prison, highlighting the grim conditions and notorious and dangerous environment inside living alongside murderers.

Becker spoke about one incident in particular that happened at the Wandsworth facility where a prisoner called John threatened to kill him if he didn't do as was told. The same prisoner tried this with many other inmates.

The incident wasn't the only time Becker's life was threatened. “I thought I would lose my life in Wandsworth. Someone , a murderer I later found out wanted my coat and he wanted money and he said he would kill me if he didn't get it."

"Then in Huntercombe another murderer said they wanted to kill me, he told me what he was going to do to me unless I let him do my laundry, this was only very recently, in October".

“But, in the end, the next day he fell to his knees in front of me, apologised and kissed my hand and said he respected me."Becker revealed.

While life was horrifying inside inside prison, Becker also spoked about the help he received inside jail.

"Three people saved me in prison, they were James, Russell and Bill, they were listeners and they knew their way around and they also wanted to protect me."

Becker revealed an important lesson he had to learn in prison and that was to always make sure to watch his back at all times. This was especially in the shower even though he had his own cubicle.

“I had two big concerns, one was a double cell, sharing a cell with someone who could attack you or threaten you and then the shower cubicles," he said. "You close the door, take your clothes off and look behind you, it's not human. You have seen the films and dropping the soap but then the governor explained to me that it would be safe, so I was grateful to him."

Becker also spoke about the horrid conditions where he had to go to sleep hungry while it also helped with health.

"For the first time in my life I felt hungry - meaning I went to bed hungry," he remarked, pointing out he weighed 97kg on arrival in jail and lost 7kg over the next few months, although he had since put on more weight. "Prison was good for my health. They did have alcohol but I didn't drink any."

The details of Boris Becker's life in prison paints a very scary picture. While life prison has been showcased in movies and television, Boris's revelations on air sends chills down the spine.

At Wandsworth he was given his own private cell because of his celebrity status. But when the door slammed shut for the first time it was for him the loneliest moment he had ever had. He recalls being unable to sleep because of screams from fellow inmates, who were every kind of criminal imaginable.

There was no mirror in his cell because it could be used as a weapon and he admitted to being shocked when he discovered how he had changed.

During the interview Becker was also asked what he had taken with him to prison, the tennis champion explained he had wanted to "look cool" but he highlighted the importance of not getting noticed inside.

"I wanted to look cool, so I had a hoodie, to look like a gangster for protection and a baseball cap, everything was black," he said.

Becker was emotional during the more than two hour interview, for which he was reportedly paid €500,000.

He confessed that his 231 days in prison had given him time to rethink his life and to become closer to his four children and partner. His relationship with his daughter had become closer than ever and is greatfull for a second chance. 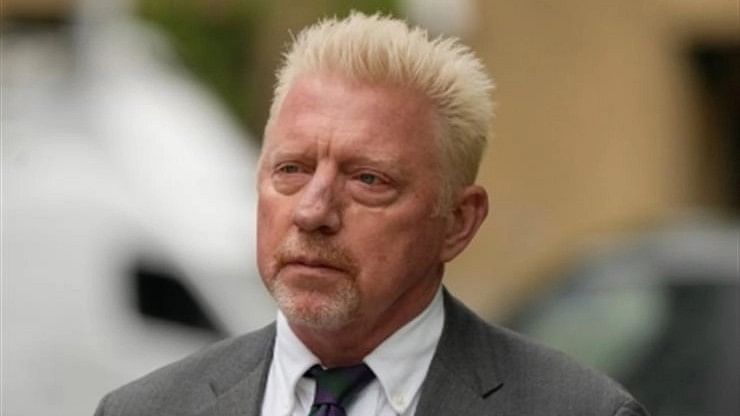