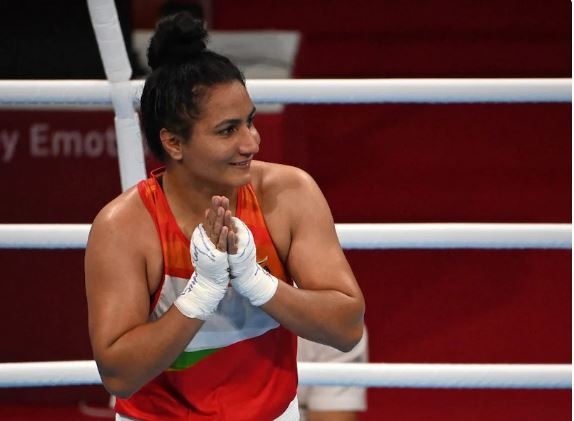 Mumbai: Indian pugilist especially the women came up with individuals brilliance, to keep the Indian medal hopes alive in the ongoing Tokyo Olympics.

After Lovlina Borgohain did it on Tuesday, it was debutant Pooja Rani to take it forward for the Indian as she out-punched Algeria's Ichrak Chaib in her opening bout in the Rani (75kg) to enter the quarterfinals on Wednesday.

The 30-year-old Indian clinched it 5-0, thoroughly dominating a rival 10 years her junior. The two-time Asian champion was in command with her right straights and also benefitted immensely from Chaib's lack of balance in the ring.

All three rounds were a story of Rani's domination as Chaib, also appearing in her maiden Olympics, just could not figure a way to connect cleanly. Rani played smart by keeping her distance. All Rani had to do throughout the bout was counter-attack as Chaib failed spectacularly in trying to hit powerfully, her wild swings mostly missing the target area.

Rani's Olympic journey has been the one of many struggles. She battled a career-threatening shoulder injury, a burnt hand and lack of financial support before making it this far.

Her police officer father did not want her to pursue the sport as he felt boxing was a sport meant for aggressive people.