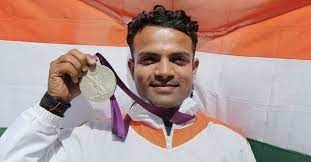 Posted at the Himachal Pradesh police headquarters (PHQ) in Shimla as a deputy superintendent of police (DSP), Vijay has made a comeback to competitive shooting after a gap of five years, “starting from zero”, nearly a decade after crowning himself in glory by winning the silver medal in the men's 25 rapid fire pistol event at the London Games.

All these years he was busy carrying out his responsibility as a senior police officer, and before that, in training to become a cop. That was after serving the Indian Army for 16 years.

Eyeing the 2024 Paris Olympics, his first challenge is the ongoing Nationals.

“I am taking part in the Nationals. I am starting from zero as I am coming back to the sport after five years,” Vijay said.

“In the time that I was not shooting, I was too occupied with my training for entering the police force and then got busy with my duty as a policeman. So never really got the time to continue shooting,” he added.

What also gives me confidence is the fact that I was able to win a silver medal at the Olympics. If I could do then, there is no reason to believe I can't in the future. I am only 35 now and can hope to shoot for at least 10 more years.”

He has been allowed by his department to participate in the ongoing championships, and Vijay also plans to seek his superiors' permission for training full-time as he trains his eyes on the 2024 Olympic Games in Paris.

He knows that it is easier said than done.

“I know the road ahead is going to be extremely difficult. Four times more than it normally would have been as I am coming back after a long time while the others are in touch with the sport and training regularly.

“But I am confident and have faith in my ability to get my bearings back in shooting. What also gives me confidence is the fact that I was able to win a silver medal at the Olympics. If I could do then, there is no reason to believe I can't in the future. I am only 35 now and can hope to shoot for at least 10 more years,” said Vijay.

A five-time Commonwealth Gold medallist, Vijay had left the Army to join Himachal Pradesh Police in 2017.

“Office work kept me busy. As is its wont the job required me to deal with cases ranging from theft, fights, and even murder. (Section) 302 ke case bhi the (302, section linked to murder was also there),” he said.

To start with, Vijay doesn't have high expectations.

India has not won an Olympic medal in shooting since Vijay's silver at the Royal Artillery Barracks on the afternoon of August 3 in 2012.