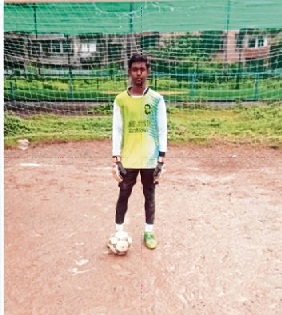 Mumbai: It was a day out for the custodians. Chris Johnson of Don Bosco and Rustomjee Cambridge's Kamran Shaikh, but it was the former boys from Matunga who had the last laugh as they managed to sneak past spirited challenge of Rustomjee from Dahisar 4-3 via penalties, to stay alive in the Ahmed Sailor MSSA organised inter-school under -16 football at the St Xavier's ground, Parel here on Wednesday morning.

In the encounter which saw the keepers together exhibit good goalkeeping, with agility and anticipation. But the game took a ugly turn mid way through.

It happened in the 28th minute of play when official Anas Ansari pulled up Don Bosco's mid-fielder Harsh Naik for rough tackling and flashed a red card, which according to some it was too harsh. Clearing the air about his action against the player, the official while speaking to Free Press Journal said “Harsh was intentionally getting aggressive with his opponent, we are here to play not to fight”.

The Don Bosco supporters in the crowds were quite upset with the decision and booed the referee from the stands. According to Anas he along with his assistant referee Eshwar was allegedly pushed by few of the parents after the match. However, Don Bosco with ten-member went on to win the match.

The match was completely dominated by both goalkeepers as Chris Johnson (Don Bosco) and Kamran Shaikh (Rustomjee Cambridge) made some brilliant saves which resulted in a goalless draw in the regulation time of 30 minutes. Earlier in the match, Kamran made two back-to back saves off Don Bosco striker Keith Fernandes.

In another match, Anirudh Gangal was the hero for Swami Vivekanand, Chembur as his 28th-minute goal scored from a free-kick helped his side edge out St Xaviers High School, Fort 1-0.