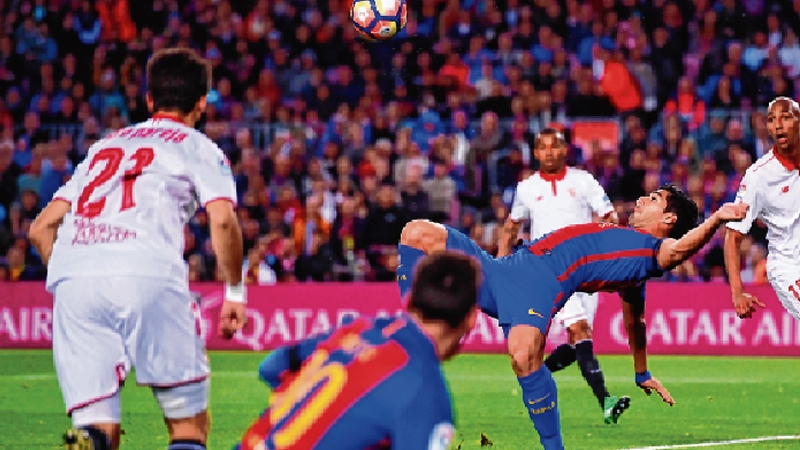 Madrid : Alvaro Morata scored twice as Real Madrid maintained a two-point lead over Barcelona at the top of La Liga by making light of Cristiano Ronaldo and Gareth Bale’s absence in a 4-2 win at Leganes.

Madrid boss Zinedine Zidane gambled on the strength of his squad ahead of a mammoth 18 days which sees the European champions welcome Atletico Madrid and Barcelona to the Santiago Bernabeu and also meet old foes Bayern Munich in the Champions League quarter-finals.

However, the Frenchman was rewarded as the likes of Marco Asensio, James Rodriguez and Morata took their chance to shine.

As well as their slender lead, Real also have a game in hand over Barcelona.

“It is not taking a risk, I have a great squad,” said Zidane.

“I am always asked about the reserves and the starters, but we are all in the same boat. We are doing great things together, but we still have a long way to go and we will need every player.”

Asensio’s storming run set up the opener for Rodriguez on 15 minutes as he weaved past three Leganes defenders before squaring for the Colombian to tap home his sixth goal of the season.

Morata’s looping header and then calm finish into the top corner from Mateo Kovacic’s pass looked to have put Madrid out of sight inside 23 minutes.

Yet, on Real’s first ever La Liga visit to Butarque, the hosts had something to celebrate before half-time as Gabriel Pires and Luciano Neves took advantage of some slack Madrid defending to cut the deficit to 3-2 before half-time. The visitors quickly restored their two-goal cushion just three minutes into the second-half, though, when Leganes captain Martin Mantovani contrived to punch the ball into his own net.

At the Camp Nou, Messi looked rested rather than rusty after being banned for his last two outings for club and country as he took his tally for the season to 43 goals in 41 games.

Sevilla’s visit offered boss Jorge Sampaoli a final chance to make his case for the Barca job at the end of the season.

But defeat continues Sevilla’s slump and a sixth straight game without a win sees them remain three points behind Atletico Madrid in the battle for third place.

Messi fired an early warning as he blasted a shot off the underside of the bar from outside the area after just three minutes.

Sevilla had two glorious chances to open the scoring as Steven N’Zonzi fired too close to Marc-Andre ter Stegen when clean through before Vitolo headed over when unmarked inside the area.

“Barca don’t need many chances to score. We had two one-on-ones and we couldn’t take them,” said a frustrated Sampaoli.

Suarez made no such mistake as he caught Messi’s deflected cross flush with an overhead kick to break the deadlock with his 31st goal of the season.

“The way the ball fell I had no other option. As a striker you have a notion of where the goal is and it managed to help the team win,” Suarez told BeIN Sports.

Barca’s star front three were all involved for their second on the counter-attack as Suarez turned Neymar’s cross back into Messi’s path to slot low past Sergio Rico.

Messi doubled his tally for the night six minutes later when he volleyed home a loose ball inside the Sevilla area.

“The first half we played at a top level,” said Enrique. “We arguably even deserved to have a bigger lead.”

Sevilla’s misery was complete when Spanish international Vitolo was sent off in stoppage time for a second yellow card after chopping down Neymar.