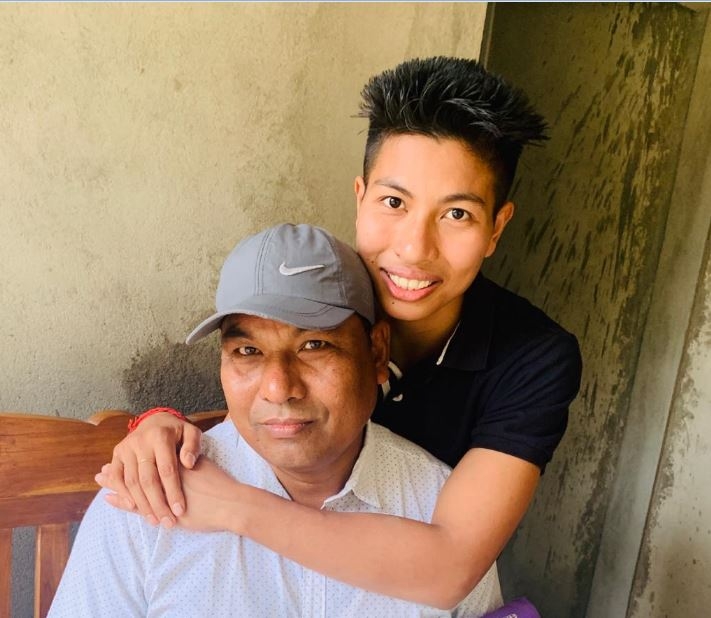 Lovlina with her father | File photo

New Delhi: Olympics boxing bronze medalist Lovlina Borgohain’s father is all set to take a flight from Guwahati to Delhi to receive his daughter on arrival from Tokyo on August 9.

The Borgohain family is overjoyed that Lovlina, the lone sportsperson from Assam in India’s 127-member Olympic contingent, got Assam its first medal in Olympics.

Lovlina, who made her debut in the 2020 Tokyo Olympics, is the third Indian boxer to win an Olympic bronze medal in boxing after Vijender Singh (2008) and MC Mary Kom (2012).

Tiken Borgohain, a 52-year-old cultivator in a small village in Baro Mukhia in Golaghat district in central Assam, told this correspondent over phone that he will reach Delhi on Monday afternoon and will be accompanied by a senior office-bearer of BFI (Boxing Federation of India).

Tiken is delighted that his daughter was able to fulfil her dream of winning an Olympics medal for India. “We, her mother Mamoni and I, want her to focus on preparation for the Paris Olympics in 2024. She left home for preparations a year back. We last met Lovlina six months ago when she came to see her mother in Kolkata. I have not bought anything for her as a token of appreciation for her extraordinary accomplishment but am happy to give her anything she asks for. She has been away for almost a year and we are looking forward to a family reunion. We are eagerly waiting for her to have traditional Assamese meal together again. Lovlina is very fond of eating fish,’’ he said.

Tiken added that the one thing that he really likes about his daughter is her environment friendly initiatives. “Lovlina plants saplings of trees wherever she goes. She obviously follows protocol when she goes to play but if she had a choice, she would plant a sapling in Tokyo. This has been her hobby since childhood. In fact, all my three daughters are very fond of gardening."

He recalled Lovlina’s emotional state after she had Covid in September last year and during her mother’s treatment. “It upset her but she remained determined. Now, my wife has to go to Kolkata again this month for a check up.’’

Neither Borgohain nor his wife watched Lovlina's matches as they feel very nervous. “We like to watch the recording later. Our neighbours came and told us of her winning the bronze medal. We have not really had a celebration so far but yes, we had rasgullas. I spoke to Lovlina when she lost in the semi-finals. She sounded sad about not being able to execute what she had planned. I tried to encourage her.’’