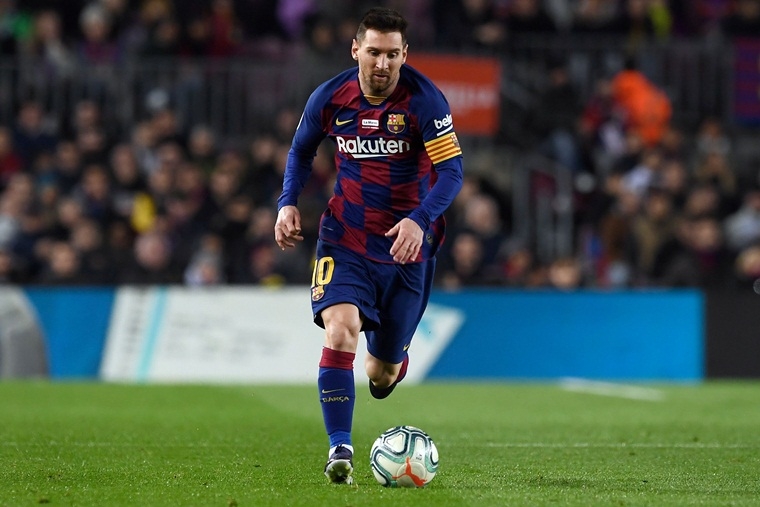 Barcelona: Argentinean legend Lionel Messi scored a hat trick and led the new attacking trio of FC Barcelona along with Antoine Griezmann and Luis Suarez -- who scored a goal each -- as the Catalan club registered an emphatic 5-2 victory over Mallorca to maintain their lead in the La Liga table.

In their best performance of this season, Barcelona played in sync as a team - with Sergi Roberto, Ivan Rakitic and Frenkie de Jong also impressing -- and dominated Mallorca, which has now lost all of their seven away games so far, reports Efe news. The hosts opened the scoring in the sixth minute when Barcelona goalie Marc Andre ter Stegen gave a long pass to Griezmann from a goal kick and the Frenchman ran more than 30 meters before tapping the ball over Mallorca goalkeeper Manolo Reina late on Saturday.

Afterwards, despite some Mallorca attempts to fight back, the hosts managed to dominate possession and move rapidly, although Japanese midfielder Takefusa Kubo managed to make some inroads into the Barcelona defence. Reina saved two headers by Sergio Busquets and Gerard Pique but could not prevent Messi from making it 2-0. Luis Suarez hit the sidebar after a great assist by Roberto and a one-on-one with Reina, as Barcelona kept up pressure but it was Mallorca that managed to score through their only shot on target when Ante Budimir's shot was deflected off Clement Lenglet and deceived ter Stegen.

However, Messi soon made it 3-1 by scoring again through a clever long-distance shot. The fourth Barcelona goal, in the 43rd minute, was the true highlight of the game, with Suarez scoring through the back of his foot after de Jong, Messi, Gruiezmann, de Jong again and Serbu Roberto passing in quick succession in an awe-inspiring build up.

After half time, Barcelona continued their dominance but slightly eased up on the attacking before Budimir scored a second consolation goal for the visitors with a header on a great cross by Fran Gomez. The hosts' coach Ernesto Valverde substituted the midfield after 65 minutes, bringing in Arturo Vidal and Carles Alena in place of de Jong and and Rakitic, and the Catalans continued to create chances, although ter Stegen saved a Chucho Hernandez shot to prevent a Mallorca third.

The match wasn't over yet because Messi was yet to put the icing on the cake for the hosts with seven minutes left on the clock. He received a pass from Suarez inside the penalty area and sent it in towards the right of Reina. The iconic Number 10 had offered his sixth Ballon d'Or to the crowd in Camp Nou before the match began, and ended the night with a hat trick which helped him go past Real Madrid's Karim Benzema as the highest goal scorer in La Liga. Having already scored 12 goals this season, Messi continues to justify the tag of being the best in the world.