Afghanistan almost knocked out Australia as the defending champions managed to survive a late cameo from Rashid Khan to edge out Mohammad Nabi's side by four runs in their final Group 1 match in Super 12s of T20 World Cup at the Adelaide Oval on Friday.

After Glenn Maxwell made an unbeaten 54 off 32 balls to carry Australia to a competitive 168/6, Gulbadin Naib and Ibrahim Zadran were leading Afghanistan to a famous win with their 59-run stand-off 46 balls for the third wicket.

However, Australia made a comeback, triggering an Afghanistan collapse from 99-2 to 103-6. But Rashid kept the fight alive for an improbable victory with a 23-ball 48, hitting three fours and four sixes at a strike rate of 208.7. But he had too much to do in the end for a famous victory, even though he caused an almighty scare to Australia as Afghanistan ended at 164-7 in 20 overs.

Australia now need Sri Lanka to beat England at the Sydney Cricket Ground on Saturday to give the hosts and defending champions a ticket to the semifinals.

Amid the last-minute scramble for a place in the semifinals, an old video of Nabi surfaced on social media. In the video, Nabi is heard saying "Hum toh dube hain sanam, tumkho bhi le dubenge (We are drowned, sanam, we will take you down too)."

The video is from Nabi's post-match press conference ahead of Afghanistan vs Bangaldesh match of the 2019 ODI Cricket Worlrd Cup in England. 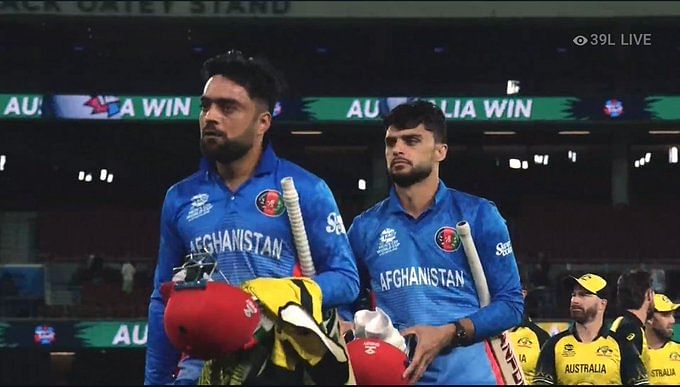