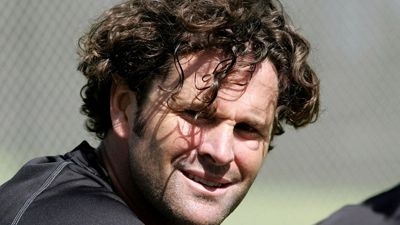 New Zealand cricket great Chris Cairns is progressing well from the life-threatening heart condition he suffered four months ago, with the all-rounder posting images of him sitting on a wheelchair with a bat, playing backyard cricket.

In August, Cairns was hospitalised after suffering a major heart attack at his home in Australia's capital, Canberra and was later airlifted to Sydney.

The heart attack resulted in an aortic dissection -- an often fatal rare heart condition -- and was on life support. He was saved by four open-heart surgeries but such was the strain on his body, a blood clot formed and he had a spinal stroke during the surgery, leaving him paralysed from the waist down.

The 51-year-old former New Zealand all-rounder also shared a post where he is seen taking a dip in the pool.

Cairns's rehabilitation routine involves five hours of work in a gym, six days a week, as he attempts to strengthen muscles, according to NZ Herald.

"Best day of rehab yet. First time using the hydrotherapy pool, first time standing unaided and to walk/float my way up the pool! Man! I've heard freedom is the oxygen of the soul being able to swim and kick my legs today was the most free I've ever felt," added Cairns.

Cairns had recently revealed his struggles saying that he might never walk again and that his sport background was helping him deal with the reality.

"Having rehabbed during a sporting career you understand mental discipline is required," he said.

"I know that some people in rehab facilities don't have that background and they struggle with motivation to get up every day. They are not seeing many gains. Having that background and single mindedness will play a role in helping me get to where I want to get to.

"It would be quite easy to give up and accept, maybe this is it. I will try and squeeze everything I can in over the next 12-24 months. Having been in a career when bones and muscles take six weeks to repair, there is no timeline here. I may get a flicker in three months in one muscle but it may take nine months.

"Your muscles atrophy over time and so then that takes time to build back up. It is one thing getting nerves to turn back on but then you have to build the muscle back up so you can stand and then walk," he added.

"I don't know if I will ever walk again and I have made my peace with that," he told NZ Herald.