Argentina, Mexico, Poland and Saudi Arabia will be vying for a ticket to the Round of 16 from Group C

In a group where Argentina are the only team in the top 10 in FIFA's last rankings before the FIFA World Cup kicks off in November, Mexico, Poland and Saudi Arabia will also be vying for a ticket to the Round of 16.

Here is a breakdown of the four teams in Group C

It has been 36 years since Argentina last won the World Cup. If 35-year-old Lionel Messi wants to recreate the team's golden age after Mario Kempes in 1978 and Diego Maradona in 1986, this might well be his last shot at glory. Although nobody on the team made this year's Ballon d'Or 30-man list, the Albiceleste are feeling their oats after beating rivals Brazil to win the Copa America last year, and the team is now more creative, balanced and united since head coach Lionel Scaloni took charge in 2019.

But midfielder Giovani Lo Celso injured his right hamstring in last weekend's La Liga game and will miss the World Cup. Despite not playing a single minute in Russia four years ago, Lo Celso has become a regular starter and Messi's best partner. His ability to control the ball and create chances in multiple positions, especially on the left side, could have released Messi closer to the goal area.

How to fit in a replacement in an already polished and well-shaped squad is something Scaloni will have to work on in the next few days.

Messi will no doubt be one of the headliners in Qatar as he chases the World Cup one last time. Having scooped the FIFA World Youth Championship in 2005, an Olympic gold medal in 2008 and the Copa America title in 2021, along with every possible titles at club level, Messi's trophy room has everything except the World Cup.

There's nothing much more to say about how and why Messi is the best player on the planet; perhaps all he needs is a bit of luck and patience.

One to watch: Julian Alvarez

Argentina never lack attacking talents, and Julian Alvarez could be the latest. The Manchester City striker scored twice on his first league start and once on his first start in the Champions League, and has five goals and two assists so far this season. With his ability on and off the ball, as well as his tireless running and aggressive defense, 22-year-old Alvarez is expected to get consistent minutes off the bench. Mexico have advanced to the round of 16 in seven consecutive World Cups dating back to U.S. 1994, an achievement that powerhouses like France, Germany and Argentina have never managed. But Mexico have been struggling to emerge as a top-tier team on the World Cup stage with a lack of world-class stars, as they have not won any of their knockout games in the last seven tournaments. But this time, whether "El Tri" could survive the group remains in doubt.

As key players like Javier Hernandez, Carlos Vela and Giovanni Dos Santos withdrew from the national team in recent years and young players failed to make their mark, Mexico have lost their solid dominance in the North American region, despite still qualifying from CONCACAF in second place.

Wolverhampton Wanderers forward Raul Jimenez is the absolute playmaker in Mexico's offense, but the 31-year-old suffered a groin injury in September and a knee injury in preseason, and has made just three league appearances so far this season. It is still uncertain if Jimenez will make it to Qatar, but his absence or lack of fitness would have a huge impact on head coach Gerardo Martino's game plan.

One to watch: Edson Alvarez

Alvarez, 25, plays for Ajax as a midfielder. Standing 187cm tall, Alvarez is a supreme athlete, and his versatile playing style allows him to cover the midfield from box to box. Starting 17 of 18 games this season, Alvarez has provided one goal and two assists, attracting the attention of some of Europe's biggest clubs, including Chelsea. Poland have only qualified for the World Cup three times since 1990, each time being knocked out in the group stage. But back in 1974 and 1982, Poland had their best World Cup memory as they finished third twice.

With the rise of Robert Lewandowski and players like Wojciech Szczesny and Arkadiusz Milik, Poland were considered one of the stronger teams at the 2018 World Cup, but suffered an early group exit with two losses and a consolation win against Japan in the last group game.

Poland now rank 26th, behind third-placed Argentina and 13th-placed Mexico, so their opening game against Mexico on November 22 will likely decide their fortune.

2022 has been a remarkable year for Lewandowski, as he left Bayern Munich after eight years to join La Liga giants Barcelona. The Pole now leads the league's scoring chart with 13 goals, showing that he is still in the prime of his career at 34. But at international level, Lewandowski failed to score in any of Poland's three group games in Russia, leaving his only appearance on football's biggest stage with no goals or assists.

One to watch: Matty Cash

In Poland's aging squad, right-back Matty Cash is one of the few young players that could occupy a starting position. The 25-year-old joined Premier League side Aston Villa from Nottingham Forest in 2020 and has been a regular fixture, being named Supporters' Player of the Season last year. Cash made his national team debut in Poland's 4-1 victory over Andorra in the World Cup qualifiers last year and has made seven appearances so far. 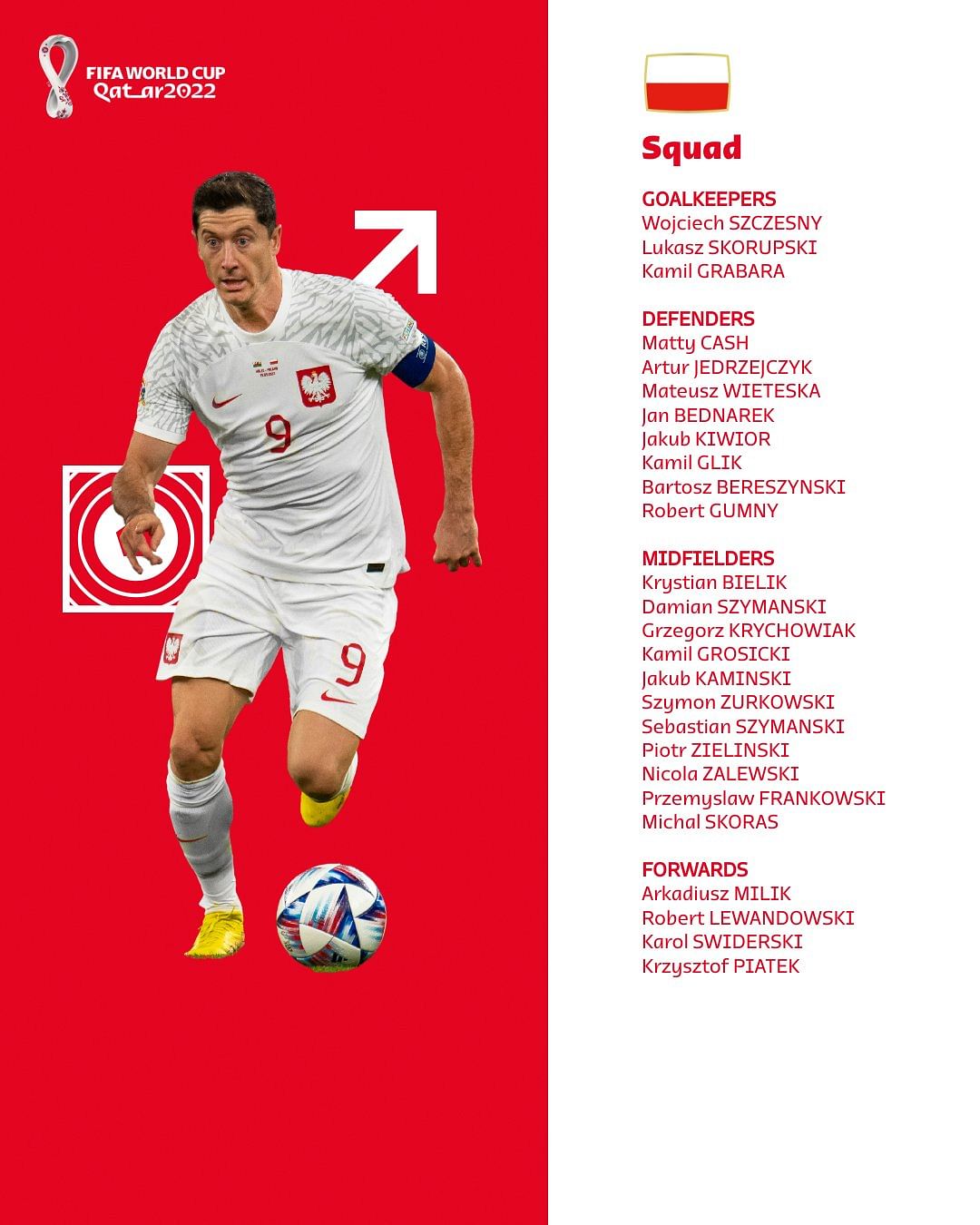 Saudi Arabia are making their sixth World Cup appearance. Their only realistic anticipation in Qatar will be to avoid another humiliation after their embarrassing string of results from the past editions, including an 8-0 loss to Germany in 2002, a 4-0 loss to Ukraine in 2006 and a 5-0 defeat to hosts Russia in 2018. But football is often where miracles happen. Nobody would have expected Saudi Arabia to finish their World Cup Asian qualifiers campaign ahead of Japan and Australia at top of Group B with seven wins, two draws and one loss, with excellent physical fitness, delicate footwork and outstanding passing skills on display.

Unlike the other three group opponents, all the Saudi players compete in their domestic league, mostly for Al-Hilal and Al-Nassr. The special team chemistry and familiarity of the players will be something Saudi Arabia can rely on.

Salem Al-Dawsari plays as a winger for Al-Hilal following a short loan at Spanish club Villarreal. The 31-year-old was one of the key players in Saudi Arabia's journey to Qatar as he scored seven goals in 13 games.

Al-Dawsari was awarded Best Player as Al-Hilal won the Asian Champions League in 2021. His ability to dribble past multiple opponents and create chances for his teammates will be decisive for the team's offence.

One to watch: Firas Al-Buraikan

Born in 2000, Firas Al-Buraikan made his national team debut at the age of 19. Returning from the senior national team after the group stage, Al-Buraikan scored one goal and laid on two assists in the quarterfinals and semifinals, and scored the second goal in their 2-0 victory over hosts Uzbekistan to help Saudi Arabia win the U23 Asian Cup for the first time in June this year.

Unlike a traditional center forward, Al-Buraikan has great dribbling skills and touches in front of goal as he tends to move close to the left and cut inside.