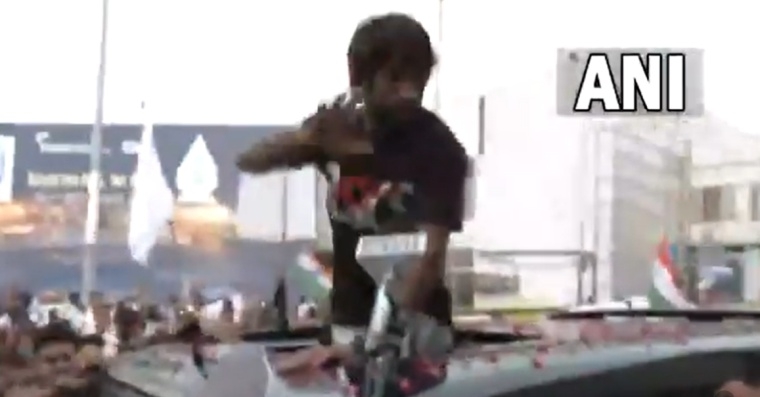 Indian wrestler Banjrang Punia after bagging bronze medal at Tokyo Olympics on Monday returned to India from Japan and received a warm welcome at the Delhi Airport. The wrestler was welcomed by a huge crowd outside the premises of airport.

Not just him but the entire Indian contigent today arrived from Japan however the most dramatic exit was made by wrestler Bajrang Punia, who was seen greeting and waving towards his supporters from the sunroof of an SUV, which had several fans clinging to it defying all traffic rules as it made its way out of the airport.

"It feels great to receive such kind of love and respect," Punia said after witnessing a grand welcome. "We will try to do better next time, I had a knee problem," Punia added.

Punia then left from the airport and reached at the hotel where a felicitation ceremony for the Tokyo Olympics medal winners will be held shortly.

There was loud cheering by euphoric fans, family members, and some local political leaders as returning athletes made their way through a massive crowd both inside and outside the airport. People danced, sang and screamed their lungs out to show their appreciation for the medal winners.

"It feels great to receive such kind of love and respect," Punia says pic.twitter.com/2rtgYyNzgW

The athletes were garlanded and presented with bouquets on arrival and were applauded by the airport staff as they made their way out to utter chaos.

The spotlight, however, is bound to target Neeraj Chopra, whose gold was India's first in 13 years overall and the first ever in the track and field events. In Photos: Tokyo Olympics comes to an end with a splendid closing ceremony; Bajrang Punia, Neeraj...