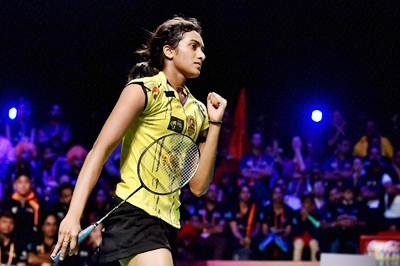 Rio Games silver medallist Sindhu started on an attacking note but briefly found herself lagging 3-4. However, she moved ahead quickly with Polikarpova making unforced errors and entered the break with a 11-5 lead.

Soon, Sindhu was on a roll, grabbing 13 straight points. The Indian used her trademark straight and cross court smashes and drops to trouble the Israeli, who couldn't utilise the few opportunities that came her way.

Sindhu sealed the first game in her favour when Polikarpova missed a shot.

Polikarpova, who was playing with a strapped knee, continued to struggle with her strokes as Sindhu opened up a 9-3 lead in the second game and then entered the mid-interval with a massive seven-point advantage.

It was business as well after the break, with Sindhu riding on the errors of her opponent.

Another wide shot from Polikarpova gave Sindhu 13 match points. The Indian squandered three of them before Polikarpova once again sent the shuttle out to end the match.

On Saturday, the Indian men's doubles pair of Satwiksairaj Rankireddy and Chirag Shetty shocked the world number duo of Yang Lee and Chi-Lin Wang of Chinese Taipei in a thrilling group A match.

However, B Sai Praneeth jeopardised his qualification to the knockout stage after going down to world number 47, Misha Zilberman of Israel, in a men's singles group D match. Tennis at Tokyo Olympics: Sumit Nagal defeats Istomin to set up clash with World No.2 Daniil...