So this happened 800 mn years after the Big Bang 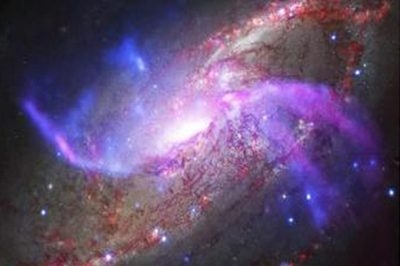 Leiden Astronomers have discovered a luminous galaxy caught in the act of reionizing its surrounding gas only 800 million years after the Big Bang. The research, led by Romain Meyer, PhD student at UCL in London, UK, has been presented at the virtual annual meeting of the European Astronomical Society (EAS). Studying the first galaxies that formed 13 billion years ago is essential to understanding our cosmic origins. One of the current hot topics in extragalactic astronomy is ‘cosmic reionization,’ the process in which the intergalactic gas was ionized (atoms stripped of their electrons).

Cosmic reionization is similar to an unsolved murder: We have clear evidence for it, but who did it, how and when? We now have strong evidence that hydrogen reionization was completed about 13 billion years ago, in the first billion years of the universe, with bubbles of ionized gas slowly growing and overlapping. The objects capable of creating such ionized hydrogen bubbles have however remained mysterious until now: the discovery of a luminous galaxy in which 60-100 percent of ionizing photons escape, is likely responsible for ionizing its local bubble. This suggests the case is closer to being solved. The two main suspects for cosmic reionization are usually 1) a population of numerous faint galaxies leaking ~10 percent of their energetic photons, and 2) an ‘oligarchy’ of luminous galaxies with a much larger percentage (>50 percent) of photons escaping each galaxy.

In either case, these first galaxies were very different from those today: galaxies in the local universe are very inefficient leakers, with only <2-3 percent of ionizing photons escaping their host. To understand which galaxies governed cosmic reionization, astronomers must measure the so-called escape fractions of galaxies in the reionization era. The detection of light from excited hydrogen atoms (the so-called Lymanalpha line) can be used to infer the fraction of escaping photons. On the one hand, such detections are rare because reionization-era galaxies are surrounded by neutral gas which absorbs that signature hydrogen emission.

On the other hand, if this hydrogen signal is detected it represents a ‘smoking gun’ for a large ionized bubble, meaning we have caught a galaxy reionizing its surroundings. The size of the bubble and the galaxy’s luminosity determines whether it is solely responsible for creating this ionized bubble or if unseen accomplices are necessary. The discovery of a luminous galaxy 800 million years after the Big Bang supports the scenario where an ‘oligarchy’ of bright leakers emits most of the ionizing photons. –ANI