Advertisement
Home / Press-release / Disappointed by the Roopkund Trek ban: we’ve got you covered with these unique options

Disappointed by the Roopkund Trek ban: we’ve got you covered with these unique options

A few months back this headline shocked everyone across the trekking community and there is a wave of disappointment among the trekkers and the service providers.

Like all good things in the universe have a defined end or a halt, so does our beloved Roopkund trek. The famous trek which has had many trekkers walk on its trail after being a constant favorite for many years has finally been banned due to the harm that we have caused to the biodiversity of the alpine meadows which fall on the trail.

I know this little information has caused a lot if stir so here is the complete story for you.

So recently the Hon’ble High Court of Uttarakhand passed a judgement saying that the camping in the high-altitude meadows of Uttarakhand is to be banned until further notice.

Due to this ban the Roopkund trek cannot be undertaken as the final leg of the trek cannot be completed without halting at one of the meadows. This decision has had a very serious impact on the entire village surrounding the trail of the trek as it was their primary means of income. But keeping in mind the importance of conservation of the sensitive biodiversity of the meadows, the government has decided to go ahead with the ban.

Even though the livelihood of many villagers has been impacted it is important that we understand that the harm caused due to trekking had increased so much that we had no other option.

So, let’s not get disheartened by this ban, but instead pick up our rucksacks and hit the other Himalayan trails. Trust me, looking over the internet I found some really beautiful and comparable options to the Roopkund trek.

Although the ban has hit me a little hard too, I believe that having such a huge part of the Himalayas in our territory is a boon at this hour. Let’s take one new challenge.

Here are some of the alternative options that you can explore instead of the Roopkund trek. 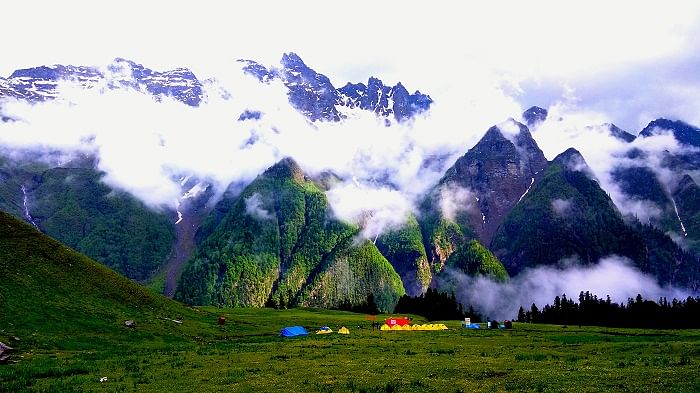 The Buran Ghati trek is another gift of Himachal Pradesh. The trek lies in the Shimla region, starting from Janglik and ending at Barua. The pine and oak trees trail leads you into a beautiful forest cover and meadows consecutively. You will come across the frozen Chandraharan lake. This glacial lake is one sight you cannot take out of your mind once you see it. The Buran Pass lies at an altitude of 15,059 feet. That’s quite an altitude gain! The trek can be completed in 8 days.

Numerous little water streams enchant you on the trail. As you reach the Barua village, you will find yourself amidst many fruit trees. Peaches, apricots, apples, pears and what not. Quite a treat after a trek!

The descent from the pass is quite different from any other average descent. The slope is so steep that you have to slide for most of it. It’s quite an adventure, I must say.

Though this trek is a difficult one, if you have some experience and want to see a trail that has everything that you could be looking for in a trek, then this trek should be on your to-do list for sure. I myself did Buran Ghati trek with Bikat Adventures. And it surpassed all my expectations. The Rupin Pass Trek is one of the biggest surprises that the Himlayas have thrown at us. This trek is packed with different terrains, flora and fauna, waterfalls etc. at each and every day of the trek. This trek is moderately difficult and is a must do for all the trekkers out there. The trek starts from Dehradun in Uttarakhand and as you cross you Rupin Pass you land in Sangla in Himachal Pradesh. The major highlight of the Rupin pass trek is the three-level waterfall. During the trek, you gain an altitude of 15,197 feet. The panoramic view from the pass is to die for.

The total distance covered over the 8 trekking days is around 52km.

It’s quite thrilling to start a trek from one state and end up in another in 8 days. The Rupin Pass trek has often been crowned as one of the most scenic treks of the country. This have-it-all trek is often seen in the bucket list of the trekkers. 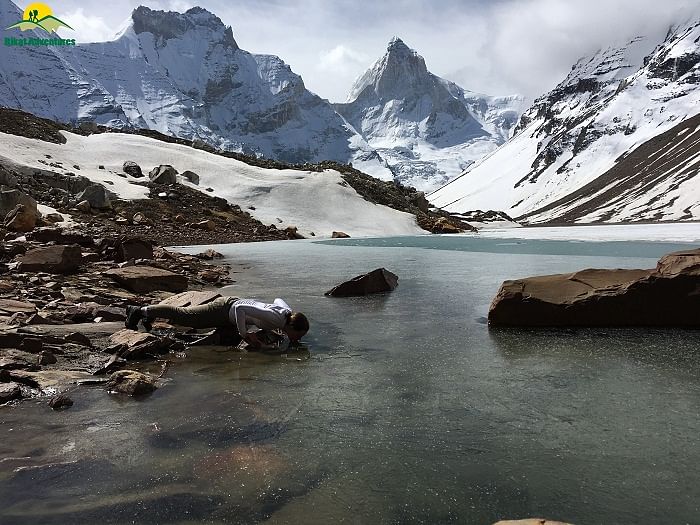 The only word that can define the trek to Kedartal is magical. The beautiful trail to Kedartal, also known as Shiva’s lake looks straight out of a postcard. The trek starts from the beautiful small village of Gangotri, which is of great significance according to Hindu mythology.

The lake is sourced by snowfall over the gigantic peaks that surround it. Mt. Thalay Sagar, Meru and Bhrigupanth along with other peaks cast their shadow over the blue waters of Kedartal. Take a sip of the cool waters once you are at the lake, it will be the most rejuvenating drink that you have ever had. The entire trek is surrounded by a feeling of serenity and spirituality.

During the 7 trekking days, you gain an altitude of 15,748 feet. The total distance you cover on your feet is around 38kms.

If you are looking for peace and some time away from the hustle bustle of the city life, then the Kedartal trek is the one for you. The Kedartal trek is a moderately difficult trek and is an option that a lot of trekkers can opt for.

With these alternatives you can enjoy the offbeat trails and their serenity. They are not as crowded as Roopkund trail and very comparable in their beauty. Since the Roopkund ban, trekkers now have a chance to test their abilities on new trails and push their limits.

By trekking on these alternative trails, we are giving the Roopkund meadows a chance to revive and hopefully come back to life in full swing soon. Also, we should feel responsible towards conserving the biodiversity of the Himalayan trails so that we can keep trekking over the coming years.  So, pack your bags, get the trekking shoes on and go hiking on these pristine trails.