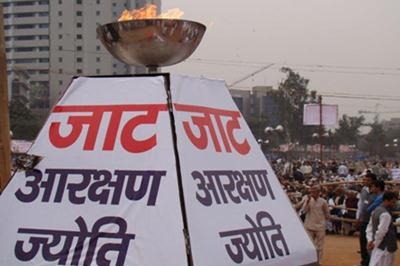 The Supreme Court’s quashing on Monday of the erstwhile UPA government’s decision to include Jats in the Other Backward Classes (OBC) category that made them eligible for reservations has exposed the blatant expediency of the regime at the Centre before the Lok Sabha elections last May.

It is disgusting how in quest of votes parties in the saddle resort to gimmicks without regard to the sustainability of their decisions, to win favour in the short term with influential vote banks and thereby try to hoodwink the potential voter.

The Congress move, besides aiming to garner Jat votes was a bait held out to the Rashtriya Lok Dal, a Jat-dominated party, to sail with the UPA.

It is heartening, however, that people at large have learnt to see through such opportunistic baits as became clear when the Congress, the main constituent of the UPA was mauled in the Lok Sabha elections that followed and the RLD of Ajit Singh sank along with the Congress.

The latest apex court order came during a hearing on a petition filed by the OBC Reservation Raksha Samiti, which had challenged the then UPA government’s decision to include Jats in the central OBC list for the purpose of 27 per cent quota for OBCs in jobs and educational institutions. The quota was announced on March 4, 2014, just a day before the announcement of the Lok Sabha polls. The motivation was indeed obvious.

In a significant judgement, the court said: “Caste, though a prominent factor, can’t be the sole factor to decide backwardness… Backwardness has to be social backwardness and not educational or economic backwardness.”

Desperate as the Congress was to cling on to power in the face of reports of public disenchantment with it, the quota for Jats was seen as an attempt to improve its poll prospects in nine states where the community has a strong presence – Gujarat, Haryana, Himachal Pradesh, Madhya Pradesh, Rajasthan, Uttar Pradesh, Delhi, Uttarakhand and Bihar.

But after its thumping victory in general elections and ahead of the assembly elections in Haryana last year, the BJP government too played the same politics of expediency and stuck to the UPA decision lest the Jats may be angered. Consequently, there is no denying that expediency applies across the board in this country but the voter increasingly sees through it.