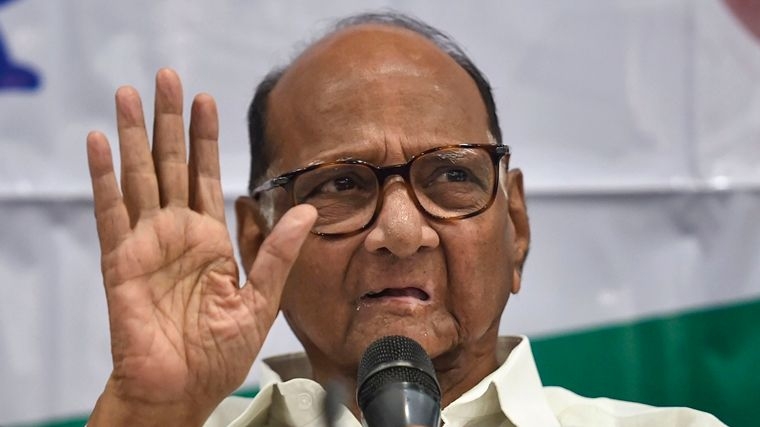 Mumbai: There is a bigger role awaiting NCP chief Sharad Pawar in national politics. Pawar, part of the Opposition delegation that met the President of India on Wednesday over the ongoing protests against farm laws, has emerged as the frontrunner to be the chairperson of the United Progressive Alliance (UPA), replacing Congress president Sonia Gandhi.

Authoritative sources said Pawar could be a consensus candidate for the post, considering his political stature, his cordial relations with political parties, resources, 'bandwidth' and most importantly, his secular credentials. Sonia Gandhi is currently interim president of the Congress party, which is holding elections early next year to elect a new leader. Unlike the last time, Sonia is not like to continue as UPA chairperson even after stepping down from the Congress president’s post which was formerly held by Rahul Gandhi.

A former Congress chief minister, who did not wish to be quoted, said regional party leaders, including TMC supremo Mamata Banerjee and DMK President MK Stalin were not likely to agree to negotiate with younger Congress leaders like, say, Rahul Gandhi. Currently preoccupied with sorting out its internal problems, the Congress is in a weak position and the power Sonia Gandhi held in the past has diminished.

Against this backdrop, Pawar emerges as a strong contender, considering how he checkmated the BJP last year and became the architect of the Maha Vikas Aghadi government comprising the Shiv Sena, the NCP and Congress. Despite the BJP having steadily played doomsayer, setting new deadlines for the collapse of the MVA government, it had recently completed one year in office with Pawar predicting that the alliance government would not only complete its five-year tenure but continue further.

Pawar can speak to Mamata or Stalin or other opposition leaders and can mobilise their support. But this feat is not possible for other regional satraps, it is being said. However, Pawar’s adversaries in the Congress party claim the Maratha strongman cannot be always trusted.

Pawar was not reachable for comments. However, party spokesman Mahesh Tapase said, “There are unsubstantiated reports in the media regarding NCP National president Shri Sharad Pawarsaheb taking over as the chairperson of the UPA. Nationalist Congress Party would like to clarify that there is no discussion among UPA partners regarding any such proposal. The reports appearing in the media seems to be have planted by vested interests, to divert attention from the ongoing farmers' agitation.’’

Pawar’s nephew and Maharashtra Deputy Chief Minister Ajit Pawar said “Pawar Saheb has excellent relations with leaders across parties, regardless of whether he is in power or in the opposition. Now he has taken the lead in resolving the farmers’ crisis. Be it the UPA or the NDA, they decide their respective strategies by sitting together. As far as the news of Pawarsaheb becoming UPA chief is concerned, I have not heard anything. We are currently focusing on his birthday celebrations.’’

On the other hand, NCP national spokesman and Minister of Minority Affairs Nawab Malik said, “Pawarsaheb had recently said that he would take the initiative in bringing together non-BJP and like-minded parties but he never talked about leadership of the UPA.”