Kochle went to the spot to find the dog's name as Shaggy who died at the spot near the Sankalp bungalow.
Faisal Tandel

The Shree Nagar police in Thane have registered a rash driving case against a pickup tempo driver for killing a stray animal. The police said the accused fled away after killing the dog. The police are trying to trace the accused with the help of CCTV footage that captured the incident.

The police said the complainant was identified as Pratik Kochle (27), is a resident of Thane. Kochle claims on November 19, he was sleeping at his house, he received a call from his friend at 5:30 am who informed him about a dog found dead on the road.

Kochle went to the spot to find the dog's name as Shaggy who died at the spot near the Sankalp bungalow.

"However, to file a complaint regarding the same Kochle along with his friend started gathering evidence. We checked the CCTV footage from the vicinity and found the accident took place in-between 1 am to 5:30 am by a milk tempo MH 47 Y 6570 which rammed the dog. The footage shows it happened at 3:25 am. Instead of taking the stray to hospital, fled away from the spot," said a police officer.

Earlier the police were not ready for a case in the matter, but after a follow-up and a complaint from Sudhir Kudalkar, and ACP and founder of PAL group and Nidhi Sawant and member of Pal group the police registered a case.

The Shree Nagar police have registered a case under section 279 (rash driving or riding on a public way) and 429 (mischief by killing or maiming cattle, etc.) of the Indian penal code and sections of the Prevention of cruelty to animal act 1960.

"We have registered a case and have got the footage which clearly shows the milk tempo ramming the dog. We are in search of the tempo driver and investigation is going on," said a police officer. 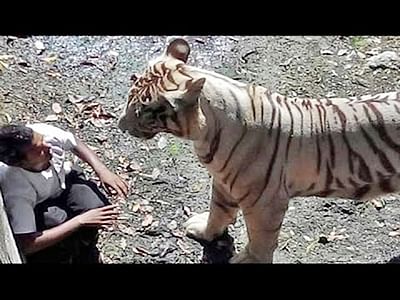