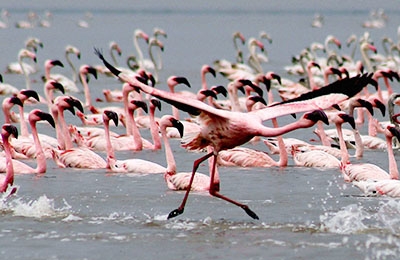 The case pertains to demolition work being carried out near an Eco-Sensitive Zone, officials informed on Wednesday.

Those accused in the ACB's FIR have been identified as forest guards Sanjay Pawar (55), Deepak Verma (35), and Amit Rane (39). The trio is posted at the Forest Department office at Thane.

According to the ACB, the complainant in the case works as a site supervisor at a demolition site at Vashi. "The three accused forest officials had visited the site and told the complainant that the said site is just 10 kilometres away from the border of Thane Flamingo Sanctuary and falls under the Eco-Sensitive Zone," the agency claimed in a statement.

"The accused also told the complainant that no permission was sought from the National Wildlife Board and Thane Forest Department in order to carry out the demolition work and had also given him notice. The accused had also demanded a bribe of Rs 5 lakh from the complainant to settle the issue," the statement alleged.

He added, "There is no need for an NOC for demolition. It is needed for construction work only. Accused officials only wanted to create fear and extract money from the victim."

On Monday, ACB officials had arrested Baliram Kolekar, an assistant conservator of forest (ACF) for allegedly demanding and accepting a bribe from a junior forest official for the release of funds. He was caught red-handed while accepting a bribe of Rs 5.3 lakh and Rs 12.46 lakh in cash was also seized during a search of his office.