His 'Bombill' app reels in buyers for about 2 tonnes of fish, within fortnight
Sweety Adimulam 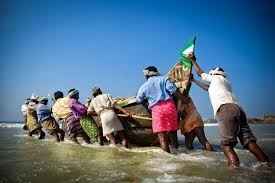 Mumbai: One could attribute it to a young man's inherent love for fish or his Koli origins, or simply the desire to solve a problem or all of the above, but Pranit Patil, 32, a human research scientist with the US-based National Aeronautics and Space Administration (NASA), has scored a 'duck' to be proud of. He has developed a mobile application, 'Bombill', named after the ubiquitous Bombay duck, to bail out fishermen from their current crisis, a crucial part of which is not being able to find takers for their catch during the lockdown. And it has spectacularly turned the tide in favour of the fishermen.

Patil said, "In just two weeks after the app was launched, more than two tonnes of various fish have been directly sold to the public." Bombill lets you buy not just that but also lobsters, super pomfrets, Indian salmon and goldfish, among others.

His work deals with Mars exploration but stuck in Mumbai because of the lockdown, Patil began exploring the trough of despair the fishing community had sunk into in this period. "Since last year, I was in constant communication with my people, trying to understand the issues they are facing and casting about for a solution. This forced downtime finally enabled me to shape an idea and I teamed up with other experts to create an e-commerce platform for fishermen, so that they could sell their catch online. And thus, Bombill was born. "

Bombill can be downloaded by any is connected with active 150 stores across Mumbai, Thane and Raigad districts. "If a customer wants to buy fish, they can order it and one of the nearest active stores out of the existing 150 will deliver. These stores are the retailers who buy from the fishermen."

Interestingly, to ensure that the freshest of catch reaches customers, only a day's catch is purchased and sold by the retailers. In layman terms, fishermen must sell catch they have netted in earlier that day, so that the retailers can sell it to customers in 24 hours. Customers can track the order through GPS and know approximately when it will be delivered, he said.

Similarly, there are apps which have been developed for the fishermen and retailers. For instance, once a retailer places his purchase order with fishermen they too can track their order. However, only retailers have access to this 'logistics app'. Fishermen too have a 'supplier app', from where the retailers can buy.

The idea of bringing all fishermen, retailers and customers on the digital platform is to eventually stop the interference of middlemen or agents. "It was found that several fishermen sell their catch to agents, who later sell it to the retailers, wholesalers and others and by the time it reaches customers, prices have hit the roof. Also, the agents do not pay the fishermen on time. This platform gives direct payment opportunities, so fishermen do not have to rely on micro-financing, which is mostly hard to obtain."

More than 30,000 people have downloaded Bombill and their purchases have helped several fishermen and retailers. Patil further explains, "The retailers are currently delivering the fishes to the customers but once the coronavirus pandemic settles, we will hire delivery boys or 'dadus', (brothers), as they are known in the fishing community. So eventually, employment opportunities will be generated."

Sushant Patil, 32, a fisherman who runs an NGO (non-governmental organisation) in Vasai and is also associated with the Bombill app team said, "I run the Bhumi Putra Foundation. Our NGO fights for the rights of the sons of the soil, so I am creating awareness about this app, which could be a boon. I am trying to reach out to the young generation of fishermen, carrying out social media awareness drives as well as publicity by word-of-mouth, so that more people get on board, digitally."