Shriram Lagoo in the league of Laurence Olivier

The 92-year-old theatre stalwart died at his Pune residence on Tuesday evening after suffering a cardiac arrest.

Mumbai / Pune: Last rites of veteran actor Shriram Lagoo will be performed on Friday, a family member said, after his son arrives from the US.

The 92-year-old theatre stalwart died at his Pune residence on Tuesday evening after suffering a cardiac arrest. The last rites were earlier supposed to be held on Thursday.

His mortal remains will be kept at Bal Gandharva Rangmandir at Pune where he breathed his last – for people to pay their respects, according to a statement put out by his wife and well-known actress Deepa Shreeram.

Read Also
Who was Dr Shriram Lagoo? All you need to know about the 'Natsamrat' 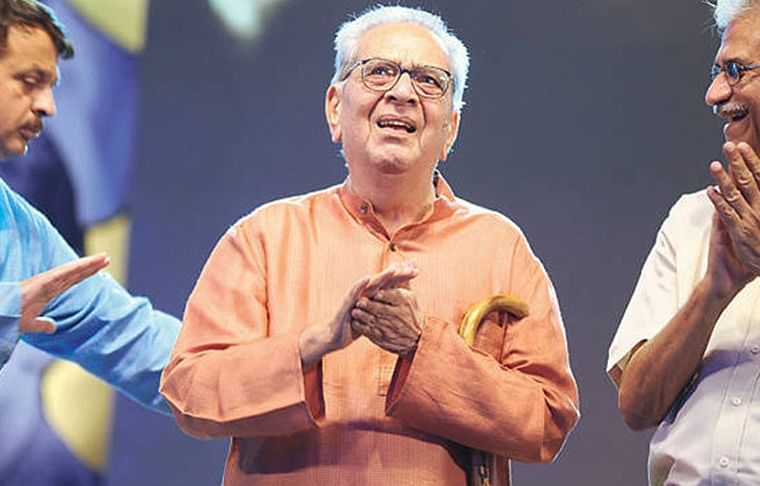 The nonagenarian, whom most of his fraternity called Doctor saheb, left his indelible mark with over 100 films in Hindi and Marathi. Filmmaker Jabbar Patel, who directed Dr Lagoo in several films, tells us, “His craft as an actor put him in the league of Laurence Olivier.

I can't think of many actors with that range. He would intelligently scale up my brief to give the character he essayed a shade or nuance that made it come alive to audiences.

At a time when method acting was not a term many were even familiar with, he was practising it.” Patel adds, “Despite his distinguished stature as an artiste he was always humble and polite to a fault.

Though he was my guru and I would be wracked with nervousness at the thought of directing him, in the beginning, he went out of his way to make me feel comfortable, though I was then only a novice.”

Echoing the view, legendary filmmaker V Shantaram's daughter and wife of maestro Pandit Jasraj, Madhura, remembers meeting “the exemplary actor” when he was shooting for Pinjara.

“The way he portrayed a humble village school teacher whose life goes haywire after he falls to the seductions of a ‘lavni’ dancer will always remain the benchmark for actors to get into character,” she says, recalling meeting him four years ago at a function in Andheri.

“It broke my heart to see how frail he looked. He had trouble recalling anything and I was pained. It was touching to see how lovingly his wife Deepa was taking care of him.”

Known for his very vocal, progressive and rationalist views, his association with the Andhashraddha Nirmulan Samiti will be recalled. Dr Lagoo had even gone on a fast in support of Anna Hazare's anti-corruption campaign in 1999.

Though an ENT surgeon by training, his contribution in nurturing Maharashtra's theatre movement along with fellow legends like Vijay Tendulkar, Vijaya Mehta and Arvind Deshpande is too great to ever be forgotten.

In January 2016, soon after the annual theatre festival Thespo conferred its lifetime achievement award on him, the legend had told this writer the secret of his craft. “For every role, I just read it repeatedly and the character comes out.

Then you just fill in the blanks. The secret of my acting is that I'm a thief. When I watch any good actor, whether Marathi, Hindi, Kannada or even British, I just observe how they walk, talk or deliver their lines and pick up things from their style, amalgamating it with mine.” Doctor saheb your candour will be missed!

HomeMumbaiShriram Lagoo in the league of Laurence Olivier