A group of Shiv Sainiks ransacked a neon signboard with ‘Adani Airport’ written on it near the statue of Chhatrapati Shivaji Maharaj close to the Mumbai International Airport on Monday afternoon. The Sainiks, led by Sanjay Kadam among others, alleged it was the Adani Airports Holding Limited’s (AAHL) unilateral move to “abruptly change” the name of the Mumbai airport and replace it with the Adani Group brand name.

“The AAHL has only been permitted to manage the Mumbai Airport, and it cannot make any changes to the name. This is an insult to the people of Maharashtra and we will not tolerate this,” a Sainik at the disruption site on Monday told FPJ. It was mayhem as Shiv Sainiks, shouting slogans, trooped onto the landscaped garden, planted flags, and uprooted the AAHL signboard in English and Marathi before stomping out.

DCP (Zone VIII) Manjunath Singe said that the police had detained a few of those involved in the incident but no case had been filed at the time of going to press.

Sena MP Sanjay Raut, however insisted that any attempt to rename the airport after an “industrialist” will not be tolerated. “Mumbai Airport is called the Chhatrapati Shivaji Maharaj International Airport. The Shiv Sena had agitated for it. It is not acceptable to us that an airport will be named after an industrialist,” he said.

The NCP, which is a part of the Maha Vikas Aghadi, also rapped the Adani Group. Nawab Malik, the party spokesperson, said, “The company has acquired a majority stake to manage the airport but it has no right to change the existing name.” 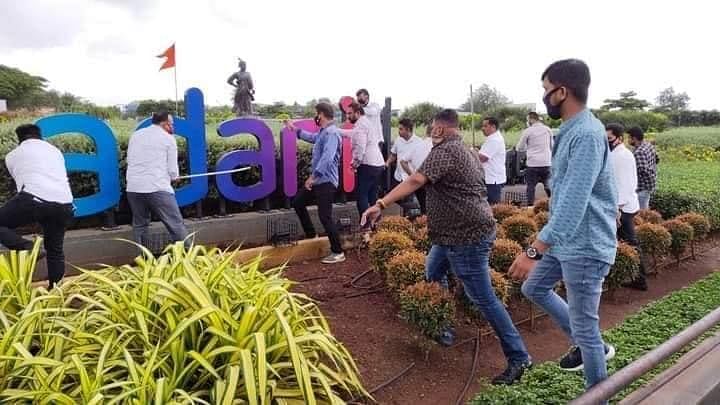