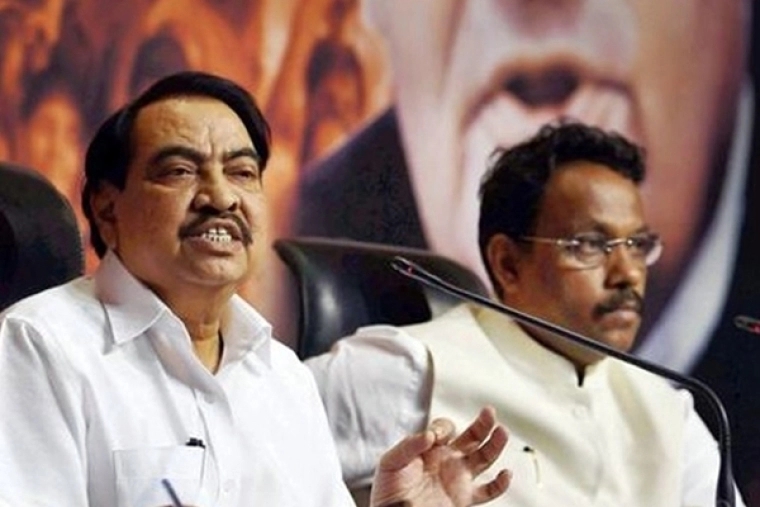 On the final day of filing of nominations on Friday, several big shots, including sitting and former ministers of the ruling Bharatiya Janata Party (BJP), got a big shock after they failed to get a ticket for contesting the October 21 Maharashtra Assembly election.

In the fourth list which was released by the BJP on Friday, higher education minister Vinod Tawde, former minister Prakash Mehta, Raj Purohit and Eknath Khadse. Interestingly, three of them -- Tawade, Purohit and Mehta -- have also served as former presidents of the power Mumbai BJP unit.

Khadse, who was virtually standing at the doorstep of Nationalist Congress Party (NCP), has apparently been mollified and backtracked after his daughter Rohini Khadse was named for the Muktainagar constituency. He welcomed what he termed as the "belated" nomination to his daughter, plus assured that he would abide by any decision of the party and work for the victory of its candidates with his 40 years of political experience behind him.

Despite Tawade doing the rounds of the party office hopefully, his seat of Borivali has been given to Sunil Rane while Rahul Narvekar has ejected Purohit -- a former minister, from Colaba constituency.

Prakash Mehta’s Ghatkopar East constituency has gone to party corporator and developer Parag Shah. Shah, who contested 2017 civic polls had grabbed headlines for being one of the richest candidates in the state. He had then declared assets worth over Rs 650 crore.

But why were they dropped?

Tawade, Purohit, Khadse, Mehta were named in one or the other scams/irregularities. So is it a signal from the BJP's high command that they are being under scrutiny and their work has been reviewed.

According to reports, the reason behind dropping Tawde is not clear but there has been speculation of his initial rivalry with Fadnavis. Prakash Mehta had been dropped from the cabinet this year following serious allegations of graft against him in a slum rehabilitation project.

In the meanwhile, the BJP was looking for a fresh face after Purohit landed in soup over sting in 2015. In the sting operation Purohit was heard commenting about Prime Minister Narendra Modi and party president Amit Shah’s style of functioning.