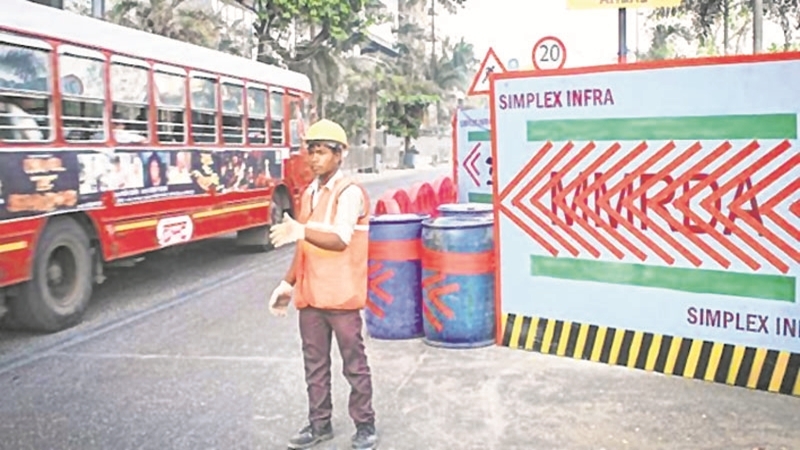 The ongoing work on Metro rail across the city has eaten up considerable motorable space thanks to barricading of lanes. If barricading wasn’t enough, then to make matters worse, a few stretches of road have been blocked, and traffic diversions are making life miserable for locals there. One such elongated period of road closure has been at D N Nagar in Andheri (W), where works on Metro-2A is going on.
This road starts from an important junction called Indian Oil, where D N Nagar Metro station of Versova-Andheri-Ghatkopar line is situated. The 200-meters odd road that’s shut for vehicles leads to Lokhandwala, Oshiwara and areas around on the Link Road. Here there are commercial offices, shopping malls, restaurants, government offices and even residential societies. There was a share-auto rickshaw stand as well, which was shifted.
The vehicles coming from Juhu and D N Nagar are expected to take a detour. The residents are miffed as the Mumbai Metropolitan Region Development Authority (MMRDA) had initially stated to keep this vital road shut until August. Yet even now, this work on Metro-2A continues, according to residents, at a slow pace.
“But it has exceeded by nearly 45 days since the deadline for opening this shut road, and yet work is still underway. This is causing a lot of trouble for motorists who have to take diversions, and it leads to heavy traffic jams throughout the day. We have informed the government authorities about this issue,” said a member of the Lokhandwala Oshiwara Citizens Association Dhaval Shah.
These residents are taking up social media and micro-blogging sites as well to raise their despair. Sources in the government said that they have already made arrangements for the partial opening of a road outside a local shopping mall to ease traffic movement. The MMRDA officials, on the other hand, said that they had completed major works on placing the girder and completing works on D N Nagar station for Metro-2A.
“It was complicated work. When we took up the work on placing the concourse pier cap, platform pier cap and girders back in July, a lot of it was to be erected, and work had to be addressed. Now barely a few works are pending, and we expect to open this road for traffic movement very soon,” said a senior MMRDA official. Likewise, another complicated work included the curvature at Oshiwara for the same Metro-2A. The MMRDA took a few nights to place girders on top, which was a difficult task.