Eknath Shinde along with rebel MLAs in Surat | Sanjay Jog

Shiv Sena leader Eknath Shinde on Wednesday claimed that 40 party MLAs have reached Assam and said that they will carry Balasaheb Thackeray's Hindutva.

.@ShivSena Minister.@mieknathshinde with ministers & MLAs including Prahar Sanghatana MLAs #BachhuKadu who is Minister of state & Rajkumar Patel at the Surat hotel. Shinde claims there are 36 MLAs & discussing with legal team for future action
They left for Gauhati
.@fpjindia pic.twitter.com/nvjFtjk8Sb

Shinde along with other MLAs was staying at a hotel in Gujarat's Surat following the cross-voting in Maharashtra Legislative Council (MLC) polls and took flight earlier today to reach Guwahati.

His remarks came as speculation is rife that Shinde along with other MLAs might join the BJP in a bid to topple the Maha Vikas Aghadi (MVA) government.

"A total of 40 Shiv Sena MLAs are present here. We will carry Balasaheb Thackeray's Hindutva," said Shinde after arriving in Guwahati.

"I came to receive them (Shiv Sena MLAs from Surat, Gujarat). I have not counted how many MLAs have arrived. I came here for personal relations. They have not disclosed any program," Borgohain said.

Have not left Balasaheb Thackeray

Speaking to media persons at the Surat airport here before leaving for Guwahati, Shinde said that they have not left Balasaheb Thackeray's Shiv Sena.

"We have not left Balasaheb Thackeray's Shiv Sena and will not leave it. We have been following Balasaheb's Hindutva and will carry it further," he said.

Balasaheb Thackeray, who founded Shiv Sena on June 19, 1966, to advocate for the interest of Marathis or the people of Maharashtra, passed away on November 17, 2012.

This comes after suspected cross-voting in Maharashtra Legislative Council (MLC) elections in which the Bharatiya Janata Party (BJP) bagged five seats, in a major blow to the Maha Vikas Aghadi (MVA) alliance government. The Nationalist Congress Party (NCP) and Shiv Sena won two each while Congress was able to clinch one seat out of the total 10 seats in Legislative Council that went to the polls on Monday.

After the MLC elections, Shinde along with some other Shiv Sena MLAs was staying at Le Meridien hotel in Surat. A Shiv Sena delegation comprising Chief Minister Uddhav Thackeray's close aides Milind Narvekar and Ravindra Phatak also met Shinde and other party legislators in Surat.

Alleging that efforts are being made to topple the MVA government, Shiv Sena MP Sanjay Raut on Tuesday confirmed that some Shiv Sena MLAs and Eknath Shinde were currently "not reachable". He said that Shiv Sena MLAs were in Surat and they were not being allowed to leave.

Amid the drama, Shinde took a veiled dig at Shiv Sena for joining hands with Congress and NCP to form the government in the state and tweeted, "We are Balasaheb's staunch Shiv Sainiks ... Balasaheb has taught us Hindutva. We have never and will never cheat for power regarding Balasaheb's thoughts and Dharmaveer Anand Dighe Saheb's teachings." Shinde has also dropped "Shiv Sena" from his Twitter bio.

He has been instrumental in strengthening the organisation in the Thane region and was made the Leader of the Opposition in the Maharashtra Legislative Assembly in 2014 after the Shiv Sena parted ways with the BJP. Shinde was appointed as a cabinet minister in the MVA government.

However, sources said Shinde has been feeling sidelined since the formation of the MVA government. His son Shrikant Shinde represents the Kalyan Lok Sabha seat.

BJP claims the state government is in minority

Meanwhile, Maharashtra BJP chief Chandrakant Patil claimed that "technically" the state government is in "minority" as Eknath Shinde and other Shiv Sena MLAs have gone.

He said that the BJP was presently in a "wait and watch" mode and added that there has not been any proposal regarding government formation neither from the BJP nor from Shinde.

"BJP got support from independents and small political parties for Rajya Sabha and MLC elections. As per our information, Eknath Shinde and 35 MLAs have gone. This means technically state government is in minority but practically it will take some time for the government to be in minority," he said.

"It's too early to say anything, we are currently waiting and keeping an eye on the situation. So far, there has not been any proposal regarding government formation neither from the BJP nor from Eknath Shinde but anything can happen in politics at any time," the BJP leader added.

The BJP and the Shiv Sena used to be allies until 2019 when after contesting the Maharashtra Assembly elections together both parted ways over the issue of the chief ministerial's post. Following days of the political impasse and high-voltage drama, the Shiv Sena finally formed the government along with the Congress and the NCP, with Chief Minister Uddhav Thackeray heading the Maha Vikas Aghadi alliance government.

Read Also
I believe Eknath Shinde will listen to me: Uddhav Thackeray 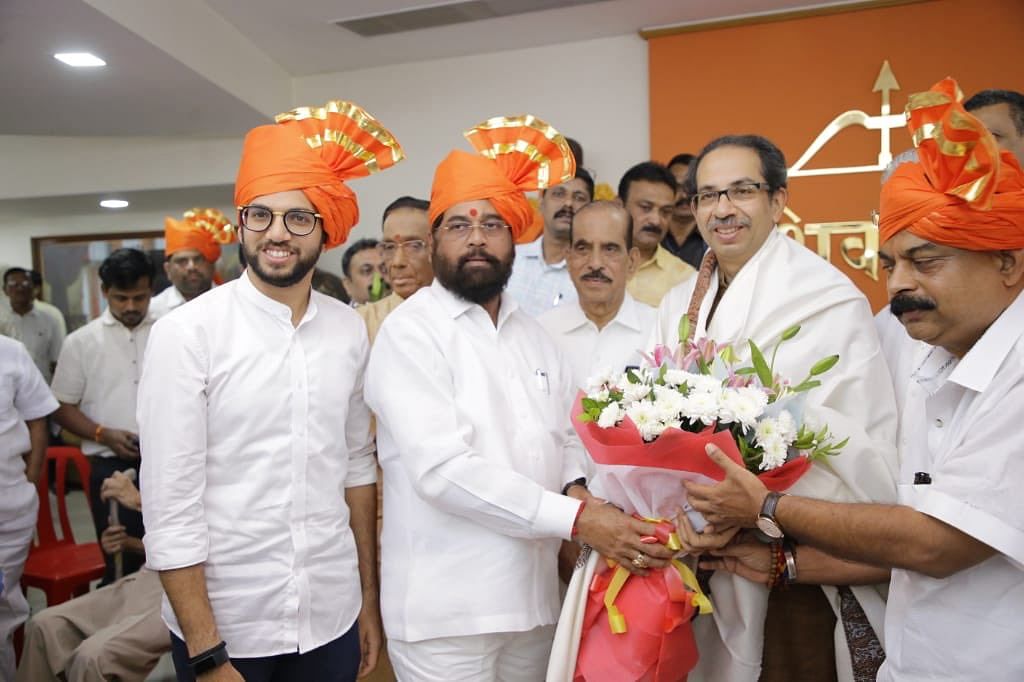