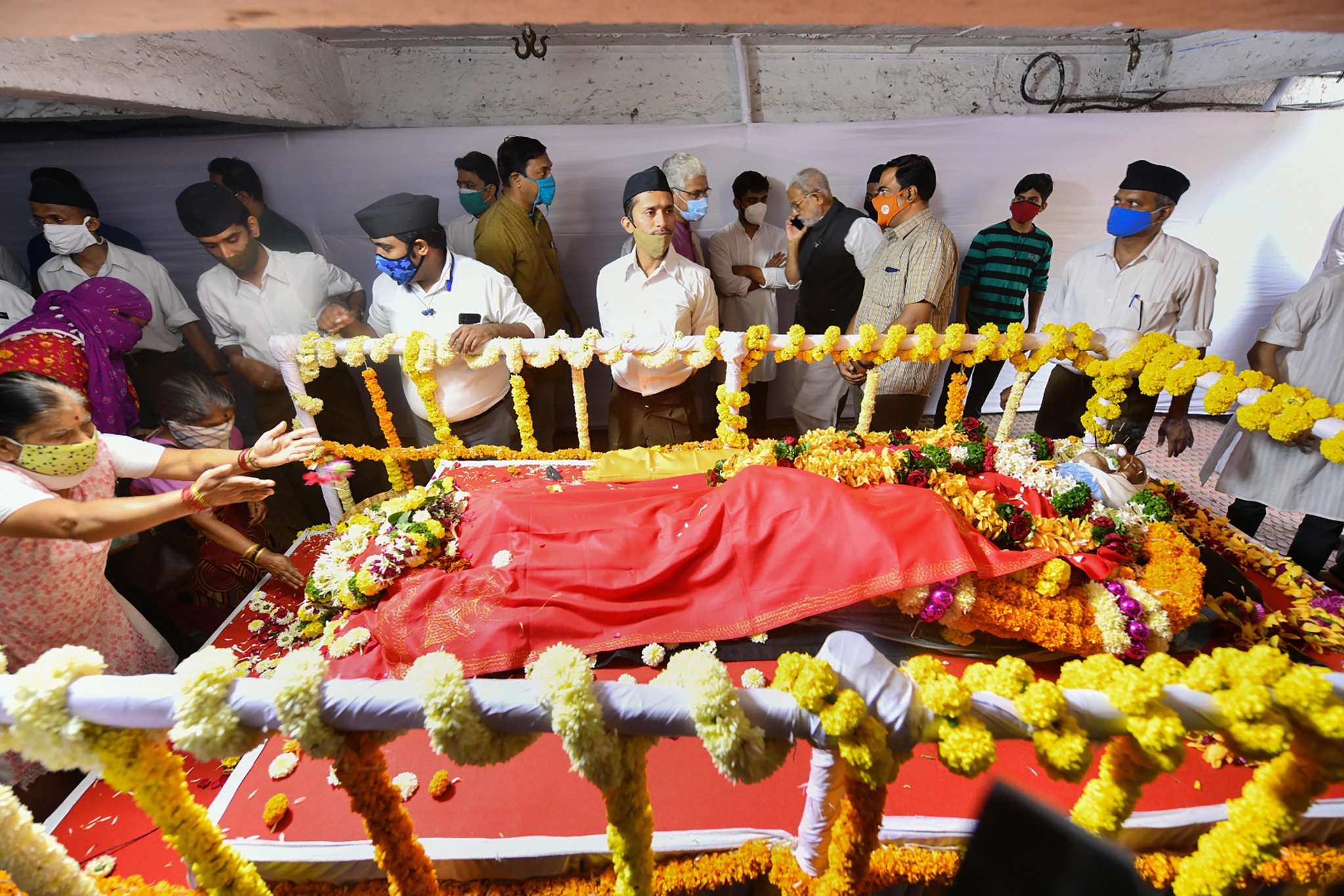 Mumbai: Noted historian and Padma Vibhushan awardee Balwant Moreshwar Purandare, popularly known as Babasaheb Purandare, died at a Pune hospital on Monday after a brief illness. Purandare, 99, an authority on Chhatrapati Shivaji Maharaj, was admitted to the Deenanath Mangeshkar Hospital four days ago and was being treated for pneumonia. He breathed his last shortly after 5 am on Monday.

Prime Minister Narendra Modi, Union Home Minister Amit Shah, RSS chief Mohan Bhagwat, and a host of other leaders expressed grief over the demise of Purandare and lauded his contribution in the fields of history and culture.

Known by his moniker 'Shiv Shahir' (Shivaji's bard), Purandare was among the pre-eminent authorities on Chhatrapati Shivaji Maharaj. 'Raja Shivchhatrapati', Purandare's two-part, 900-page magnum opus on Shivaji Maharaj in Marathi, was first published in the late 1950s and has since been a staple in Marathi households, going through numerous reprints over decades.

Purandare had also conceived and directed the theatrical history extravaganza on Shivaji Maharaj's life titled 'Jaanta Raja' in the mid-1980s. Born on July 29, 1922, Purandare was awarded the Padma Vibhushan, India's second-highest civilian honour, in 2019. The historian, who is survived by two sons and a daughter, was conferred with the Maharashtra Bhushan award in 2015.

Purandare's ambitious project 'Shivsrushti', to depict important moments in the life of Shivaji Maharaj, was taking shape in Ambegaon under his guidance. The first phase of the project was completed recently. Prime Minister Narendra Modi in a tweet said, "I am pained beyond words. The demise of Shivshahir Babasaheb Purandare leaves a major void in the world of history and culture. It is thanks to him that the coming generations will get further connected to Chhatrapati Shivaji Maharaj. His other works will also be remembered."

The PM said Purandare was witty and wise and had rich knowledge of the Indian history. "I had the honour of interacting with him very closely over the years. A few months back, had addressed his centenary year programme," he tweeted, posting a video of his address at the event.

Purandare will live on due to his extensive works, Modi said, extending condolences to his family and countless admirers.

Rashtriya Swayamsevak Sangh (RSS) chief Mohan Bhagwat said with Purandare's death "we have lost a Shatayu Shiv Rishi". Since childhood, nationalism was rooted in Purandare from Sangh Shaka. He dedicated all his life in the devotion Chhatrapati Shivaji Maharaj and through his writings, spread the story of the Maratha king to every household, Bhagwat said.

Chief Minister Uddhav Thackeray said Purandare was a true follower of Chhatrapati Shivaji. "You will not find a true follower of Shivaji like him. Chief Minister Uddhav Balasaheb Thackeray expressed his deepest condolences on the demise of Shivshahir Padma Vibhushan and Maharashtra Bhushan Babasaheb Purandare, the Chief Minister's Office tweeted."NCP chief Pawar in a tweet said, With the demise of Shivshahir Babasaheb Purandare, Maharashtra lost its luster in the field of literature and art. A heartfelt tribute to them".