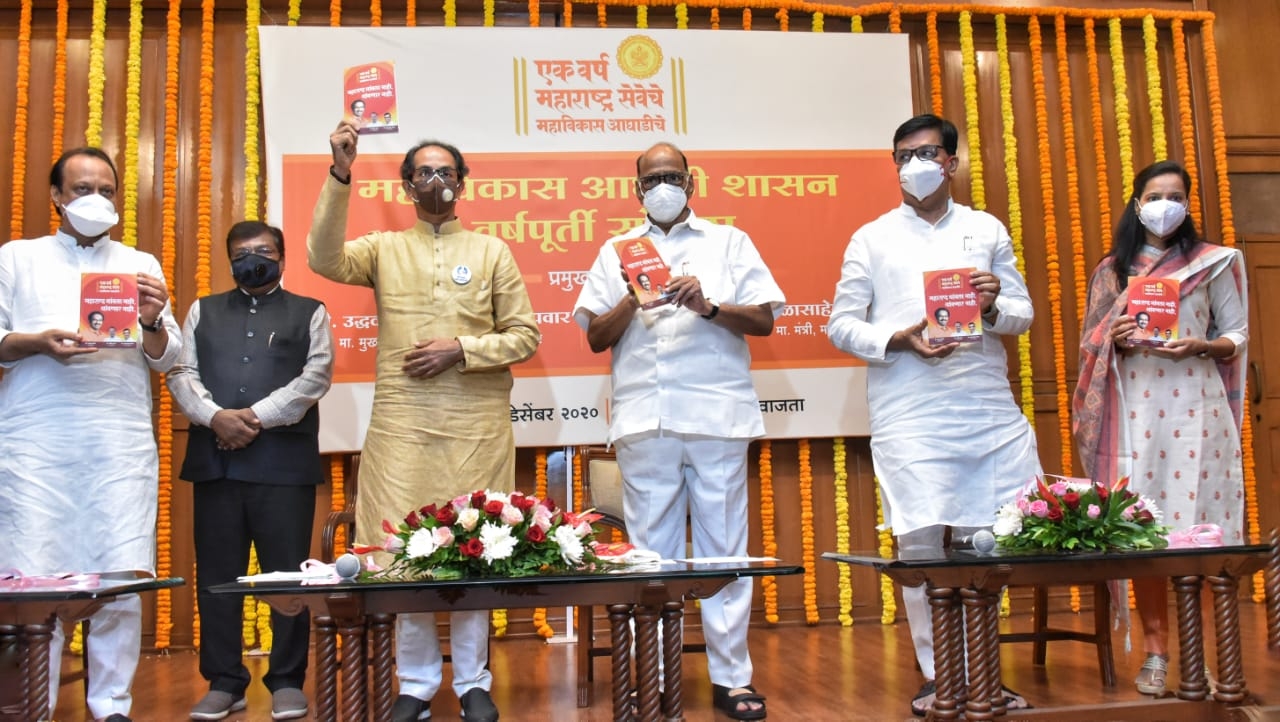 Maharashtra Chief Minister Uddhav Thackeray on Thursday led a blistering attack against Bharatiya Janata Party (BJP) for playing politics during the natural calamities and warned the saffron party that the Maha Vikas Aghadi (MVA) partners Shiv Sena, NCP and Congress will effectively tackle any political crisis in the state. Although Thackeray did not name BJP directly and mentioned about the latter’s move to issues new deadlines for the collapse of the MVA government, Thackeray sent out a strong message to its estranged ally that he was prepared for any fight and foil an attempt to destabilise or topple the government.

On the other hand, NCP chief Sharad Pawar also slammed BJP for its projections for the collapse of the MVA government as the former has yet to digest the loss of power in Maharashtra. Pawar said the growing restless in BJP because of its inability to retain power can be understood but announced that the government will not just complete five year term but will continue to the rule in future too due to the people’s support.

Both Thackeray and Pawar were speaking at the function organised here to release a special booklet published by the Directorate General of Information and Public Relations on the occasion of completion of one year rule of the MVA government. Deputy Chief Minister Ajit Pawar also took a dig at BJP predicting the MVA government’s failure saying that the government under Thackeray’s leadership was strong and stable.

Thackeray at the outset thanked Pawar, Congress president Sonia Gandhi and his ministerial colleagues for their strong support and cooperation in the last one year. “There is a huge difference between the watching a cricket match from pavilion and play the game. It is true I had no administrative experience but due to Team Work and guidance from the heads of ruling partners helped me a lot to effectively tackle a number of crisis including coronavirus and various natural calamities. I am gaining experience now. It is not just three parties that are together but because of solid support of the people that had helped the government to complete one year and the government is ready to take state to a new height,” he said.

He took a swipe at BJP for its repeated criticism that CM works from home saying that his ministers were on the ground all the time that has helped state to march ahead.

He further said he was quite comfortable with the functioning of his ministers who enjoy complete freedom. “There is no need to conduct phone tapping. We are working together with full faith and confidence,” he viewed.

“Sonia Gandhi speaks to me on phone, wishes me and then asks me Hamare Log Satate ToNahin Hai (asks whether Congress members were not harassing you), I tell her they are cooperating better than NCP,’’ said Thackeray.

Thackeray said the government has never hidden any numbers especially of COVID infected people during its surge and also when the state was witnessing downward trend. “The government has maintained transparency,” he noted.

Pawar said it was quite unusual that the newspapers and media were doing post mortem and analysis of one year rule of the MVA government. “This has never happened in the past. Despite natural calamities, the farmers had not hit the roads against the MVA unlike the protesting farmers gathered in Delhi against farm laws. The government despite financial crunch has made every attempt to help the farmers hit hard by untimely rains and floods. The government has a unique mix of old and experienced administrators and new faces who could pull the ‘Jagannath Rath’ together,” he noted.

DCM Pawar said despite repeated pleas the Centre has yet to clear dues of Rs 28,000 crore towards GST and other taxes. “Undeterred by the present fund crunch and lack of early clearance of dues by the Centre, the government has made adequate provisions for public health, home, medical education, food and civil supplies and relief and rehabilitation works. The government is committed to revive the economy and take it to new scale,” he added.

Revenue Minister Balasaheb Thorat also recalled how three parties came together to form the government and completed one year.