A 140-seconds long clip shared by BJP leader and MLA Nitesh Rane on Sunday via twitter showed a dead body, covered in a plastic bag, kept on the bed in a ward where patients were treated
Dipti Singh 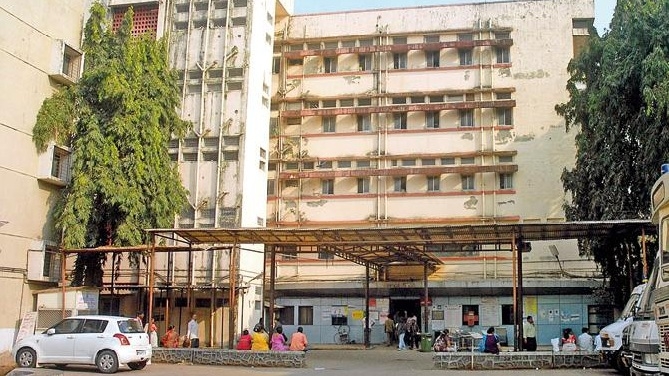 Mumbai: After Lokmanya Tilak Municipal General (LTMG) Hospital in Sion and KEM Hospital in Parel, now a video of a corpse lying next to a living patient in a Covid-19 ward at Rajawadi Hospital in Ghatkopar has surfaced on social media. Like the previous two videos, even the Rajwadi hospital video was posted on Twitter by BJP leader and MLA from Kankavli – Nitesh Rane.

The 140-seconds long clip shared by Rane on Sunday via twitter showed a dead body, covered in a plastic bag, kept on the bed in a ward where patients were treated. A woman is seen on the bed placed next to the one on which the corpse is placed. The appalling video, he claimed, was recorded at Mumbai's Rajawadi Hospital, which is also run by the Brihanmumbai Municipal Corporation (BMC).

The video was shot by another female patient admitted to the same ward. The Marathi speaking woman in the video is heard saying, "The dead body lying here belongs to a woman who died due to coronavirus infection and the body has been lying unattended for about 11-12 hours. The woman who shot the video has also alleged that the patient who died kept asking for water several times minutes before she died. However, nobody in the hospital attended her and she finally died."

The woman further said that patients were also lying next to her but the employees of this hospital did not attempt to remove the dead body for almost 11-12 hours.

Packed morgues, bodies in wards, patients forced to share beds and medical workers run ragged, Mumbai's war against coronavirus has pushed the Indian city's hospitals to breaking point. Hospitals, however, claim that they are doing enough to ensure dead bodies of Covid 19 patients are disposed of as per the protocol, however, many relatives do not turn up to claim the bodies.

"We are all working round the clock to ensure people get cured and go home. We are fighting day and night to contain the disease. Why would we keep the body lying unattended for hours when we know the protocol and also that people report it on social media? We face so many issues, but people want to highlight issues like these. Sometimes a corpse is lying on the bed for 40-45 minutes to an hour as many a times relatives come late or do not turn up at all. Some ask us to dispose of the body. We have created an additional room apart from the morgue to keep the dead bodies of Covid-19 patients until it is handed over to the relatives. It is unfortunate that something like this has been highlighted. I am investigating the matter and will look into the matter as in what actually went wrong," said Dr Vidya Thakur, Medical Superintendent of Rajwadi hospital.

In the past one and half month, the four civic-run hospitals have disposed of around 125 non-Covid unclaimed bodies to make space for Covid bodies. Of these, KEM hospital handed over 36 unclaimed bodies to police and 17 were shifted to the anatomy lab. Police disposed of another 30 unclaimed bodies from Sion hospital and 39 from Cooper hospital. Police have disposed of three bodies from Nair hospital. “We have also divided our cold storage into two— the hospital morgue has been turned into Covid and the morgue under the post-mortem centre has been kept as non-Covid. This has been done to curb any possible transmission,” said a forensic expert from the hospital. Similarly, Sion hospital has also divided their morgue into Covid and non-Covid.

About the Protocol on disposal of dead bodies and debates around it:

According to the health department’s rules based on the guidelines of the Union health ministry, dead bodies need to be removed from the ward within 30 minutes and disposed of within two hours. However forensic experts claim the time limit is not feasible. Firstly, a large city like Mumbai gets patients from far-off areas in Thane and Navi Mumbai. In some cases, the families refuse to take the bodies, fearing infection. Also, the lockdown makes it difficult for relatives to find vehicles to reach hospitals in time. In some cases, relatives can’t reach hospitals as they either are in isolation centres or home quarantine.