Homemakers can expect a little relief as the price of onion, one of the important ingredients of the kitchen is likely to come down.

The Agriculture Produce Market Committee (APMC) has received around 25 tonnes of onion imported from Iran on Monday.

There is a shortage of onions in the local market due to excessive rainfall that damaged the crops.

It was hardly a month ago when a section of traders and farmers were echoing their voices against the ban on the export of onion.

However, within a month the scenario has changed and there is a shortage of onions in the market. The retail, as well as wholesale price, is soaring. While the wholesale price has reached almost Rs 60 per kg, the retail price ranges from Rs 60 to Rs 80 per kg. The FPJ had reported how the shortage of onion will push the price during the festival season. Within a week, the price of onion reached almost Rs 70 to 80 per kg in the retail from Rs 40 to Rs 50 per kg.

In mid-September, the supply of onion at the Kanda-Batata market at the APMC in Vashi was around 7,000 quintals with an average price was Rs 21 per kg. However, the supply came down to just 4,000 quintals on September 18 with a sharp 45 percent dip. At present, the average price of onion is Rs 55 to Rs 60 per kg in the Kanta-Batata market in APMC Vashi.

On Monday, around 66 tonnes of onion from Iran arrived at the JNPT of which 25 tonnes arrived at APMC Vashi. According to the trader, the imported onions were sold around 55 per kg while the local was sold around Rs 70 per kg.

Meanwhile, on October 19, the APMC received a total of 94 trucks laden with onion which is half of the normal supply. “The excessive rain in onion growing area damaged the crops and thus the availability of onion dipped in the market,” said a trader from the Vashi APMC. He added that it will take at least two months for the arrival of the fresh crop in the market. Meanwhile, the market will have to depend on export. “We receive onions from Turkey, Egypt, and Iran,” said the trader. 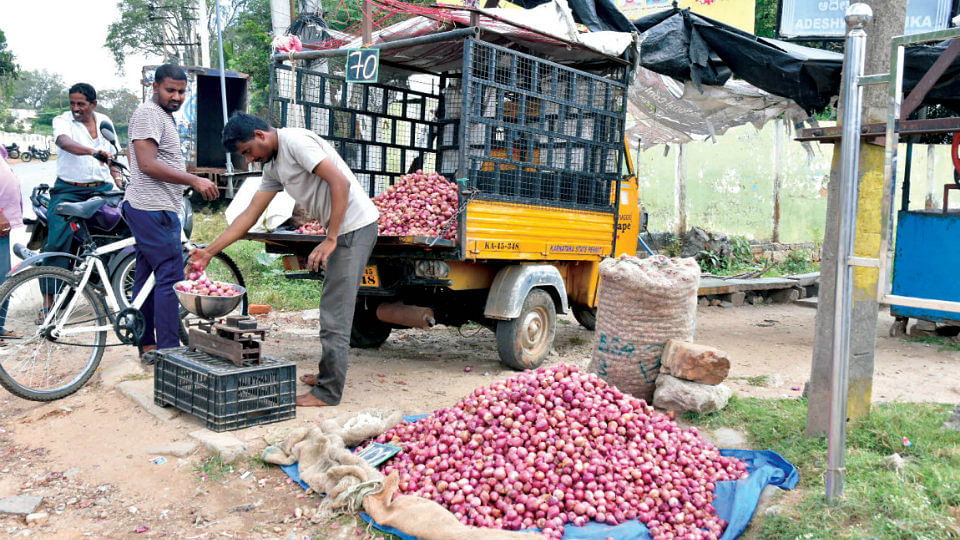