HomeMumbaiMumbai: Saurabh Tripathi denied all the allegations against him, says messaging was not in context of Angadiya

Mumbai: Saurabh Tripathi denied all the allegations against him, says messaging was not in context of Angadiya

The Mohim (campaign), was about the pandemic that had spread at that time.

Mumbai: Suspended DCP Saurabh Tripathi, during his interrogation by the Crime Intelligence Unit (CIU) on Thursday, denied all the allegations against him, saying that he has nothing to do with the three officers arrested in the Angadia case. He claims that he never spoke with police officer Om Wangate about the Angadiya extortion case. Tripathi, whose message was recovered by Wangate and said that they should continue the Mohim (campaign), said that the campaign was not about Angadiya.

While investigating, the CIU found a message sent by the then-DCP Saurabh Tripathi to the police officer Om Wangate to continue the campaign. But Tripathi says that this campaign has nothing to do with Angadiya but is for other things, including the anti-mask campaign that was going on at the time.

The police officer today informed me that Tripathi has denied all the allegations against him.

Angadiya is not legal, so on what basis has the complaint been taken?

On Angadiya's allegations, Tripathi says that Angadiya is not legal, so on what basis has the complaint been taken? Tripathi, who had been missing for nine months, did not respond when asked where he was.

The police officer said, "Tripathi says that there was Corona at that time and many campaigns were going on in which anti-mask, keeping an eye on the suspicious person, and following the guidelines given by the government. In this context, messaged."

On the other hand, Angadiya had alleged that the officials of Lokmanya Tilak Police Station were stopping his people and trying to take their money. According to Angadiya's complaint, a CCTV tape taken while taking the people of Angadiya to the police station was also recovered.

Angadiya went to Tripathi's office and also near his house to negotiate so that the police would not take action. The police have also traced the mobile location of Angadiya's stated time.

A case was registered against three police officers at Lokmanya Tilak Marg police station for extorting money from Angadiya; in this case, they were arrested. After Saurabh Tripathi's name came up in their investigation, he had been absconding since the day the FIR was lodged in this case. 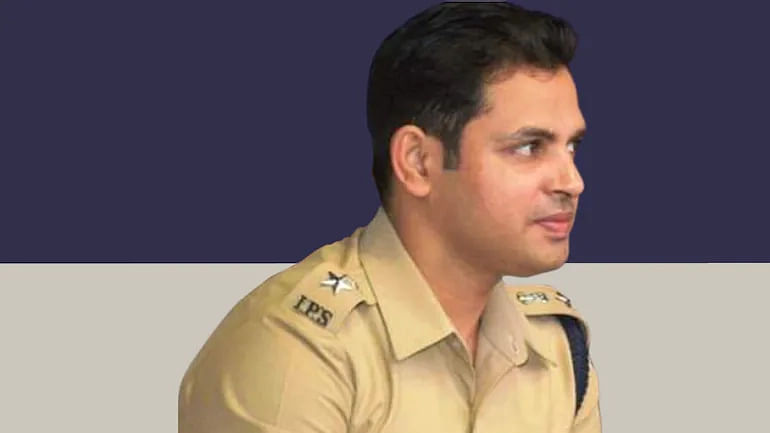