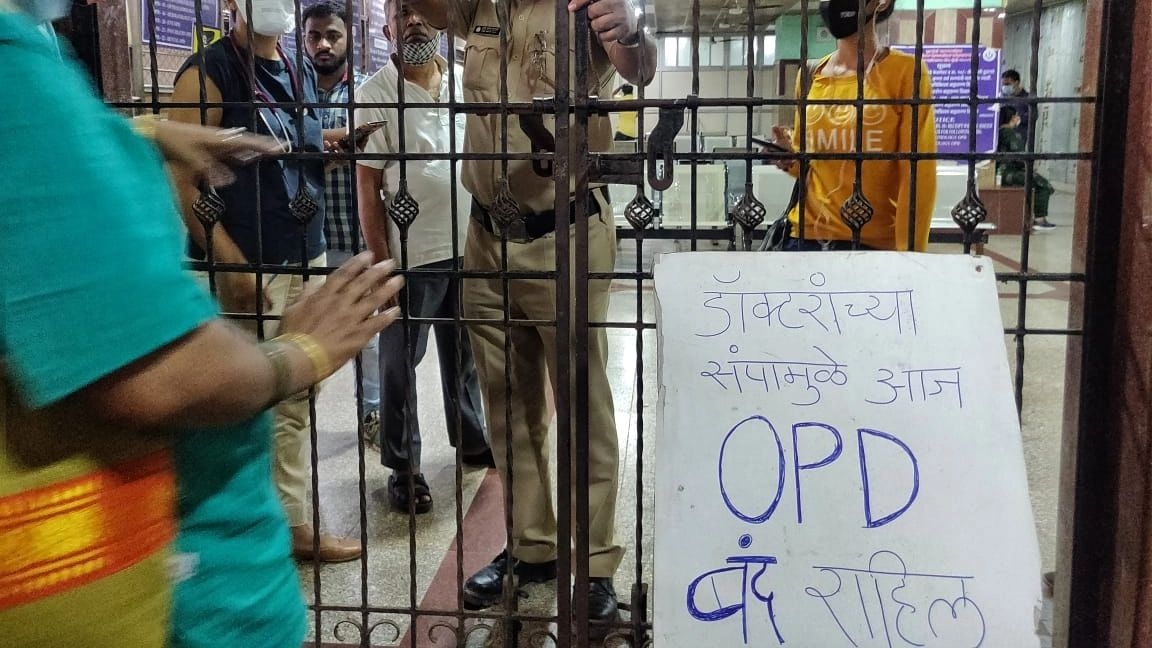 Mumbai: With the unprecedented delay in NEET-PG 2021 counselling, resident doctors at the King Edward Memorial (KEM), Lokmanya Tilak Municipal General, Sion and Sir Jamshedji Jeejeebhoy (JJ) Hospitals have declared that they will be withdrawing their services from the outpatient department and elective surgery from December 30. However, they will continue to work actively in the Covid-19 wards.

This comes after a face-off between doctors and police personnel in New Delhi on Monday as the former were participating in a protest by the Federation of Resident Doctors' Association (FORDA) on the delay in NEET-PG 2021 counselling.

According to a senior resident doctor from KEM Hospital, around 2,500 resident doctors were brutally lathi-charged, manhandled and detained by the Delhi police during a peaceful protest march on December 27. Resident doctors across the country have been demanding and protesting peacefully for the last one month. “Such acts of brutality cannot be accepted at any cost and are to be condemned severely.

“We have been working at 66 per cent of our resident capacity since the last seven months, are already overworked and burnt out, both physically and mentally at this point of time. Despite assurances and meetings with the central government and its representatives, we have received no assurance about the timeline of joining for the next batch nor regarding the counselling process. We demand that the counselling process be started as soon as possible and the next batch of juniors join their respective courses by the 1st of February 2022,” read a letter issued by KEM MARD.

The JJ MARD, in its letter, condemned the incident and demanded the immediate suspension of the police personnel who gave the directives. “The videos which have surfaced and the stories which have been shared are horrific and make us question whether we have gone back to barbaric times or whether the administration feels like they can do whatever they want to suppress dissent,” reads the letter.

Dr Dnyaneshwar Dhobale Patil, former president of MARD, said that because of the delay in counselling, the placement of resident doctors was not being done and the workload of the resident doctors was increasing. Therefore, it has been decided to go on strike from Thursday evening, although emergency cases and hospitalized patients will be treated.

KEM MARD president, Dr Sachin Patidar, said that they would go on a strike from 5pm on December 30. All the resident doctors of government hospitals and medical colleges of the state may also strike work from Friday. A meeting is underway and a decision will be taken soon.

53 of these Omicron cases have been detected in Mumbai, 19 of which 19 were found in community surveillance, taking the total of Omicron cases in Mumbai to 137.

“Currently, it is too early to say whether it is community transmission, as all 38 cases did not have any travel history but were detected in community surveillance. We will check whether all these cases have come in contact with international travellers, due to which it has spread in the community,” said Dr Pradip Awate, state surveillance officer.

“The Government of India is doing community surveillance and Mumbai and Pune have been selected and all positive samples will be sent for sequencing. Community transmission is a very technical subject with several stages, which is best left to experts,” said Dr Pradeep Vyas, Additional Chief Secretary.

Additional Municipal Commissioner Suresh Kakani also agreed that the Omicron variant had entered the community due to which Mumbai had reported the highest Omicron cases. “There is no doubt that community transmission of Omicron has started in the city and it is because of attendees at the winter session in Mumbai who were detected with the Omicron variant after their samples were sent for genome sequencing,” said Kakani.