Mumbai Rains: Brace for more rainfall in next 2-3 days 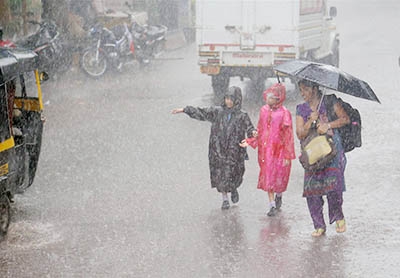 New Delhi: The financial capital of India- Mumbai has observed rainfall in some parts during the last 24 hours. But the intensity of the downpour was not even. According to Skymet, Colaba recorded 6.2 mm while Santa Cruz recorded 41.3 mm of rain.

The weather forecasting has predicted that the region is likely to receive more rainfall in the next two 2-3 days with the temperature oscillating between 24 degree Celsius and 32 degree Celsius. "September started on a good note for the city with instances of record rainfall multiple times. On many occasions, 3-digit rain was recorded in the city, which was more than double the normal figure. Between September 10 and 11, the rainfall activity in the city subsided to a large extent. But thereafter the weather changed again in Mumbai and moderate rains lashed the city," Skymet stated.

Apart from Mumbai, the national capital and its nearby regions such as Gurugram, Faridabad, Noida and Ghaziabad are also likely to receive heavy downpour for the next two days. However, these rains would be localised and would not last for long and also would not be widespread," stated the weather forecasting agency in its advisory.