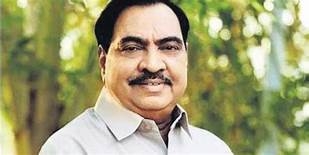 NCP leader Eknath Khadse failed to appear before a special court in the city stating health reasons on Wednesday in connection with the Pune MIDC land money laundering case.

The court had taken cognizance of the Enforcement Directorate (ED)’s chargesheet against Khadse, his wife Mandakini Khadse, son-in-law Girish Chaudhari, among others and summoned them before it. While Chaudhari is in judicial custody, the couple did not appear before the court on previous dates as well.

Khadse’s advocate Swapnil Ambure told the court, on Wednesday, that his client has been hospitalised at Bombay Hospital since October 4.

Khadse's advocate submitted his medical papers before court. The ED sought that a non-bailable warrant be issued against Khadse as he had given an undertaking that he would be present on Wednesday. Considering Khadse’s medical report, the court said that he will be exempted for the day from appearance before it.

Additional sessions Judge H S Satbhai asked Khadse to appear on the next date and said that the court will not consider any excuse.