While the Covid-19 pandemic has had a devastating effect on livelihoods across sectors, the third wave has freshly hit the incomes of the drivers and owners of taxis and auto rickshaws plying on city’s roads.

On the one hand, the CNG price has climbed up steeply from Rs 49.40/kg in February 2021 to Rs 66/kg in January 2022, increasing the operating cost for the auto and taxi drivers. The rapid spread of Omicron brought fresh curbs on movement at public places, and a night restrictions, further driving away customers.

"Auto and taxi operator of the city had somehow recovered from the first and second wave but now they are struggling for survival. Recent hike in CNG prices and the 'work from home' culture has forced them to look for an other job," said Dinesh Yadav, who has been driving the kaali peeli taxi for last 10 years in the city. "Now there is very little left after all expenses and managing a family has been tougher," he added.

Amid the devastation, the Equated Monthly Instalments for their vehicles continue to burn a hole even as their earnings nosedived.

"Many drivers have begun looking for other employment, but are getting no work. Most of them live on rented space and landlords are getting restive over delay in payment of rent. “We borrow from our acquaintances to support our families. Vehicle owners too are struggling to pay their EMIs to banks,” said KK Tiwari, head of taxi rickshaw cell of Mumbai BJP.

Ashok Pandey (44), who operates his own vehicle said, "Due to work form home restrictions, people are hardly travelling.” The finance company, he said, is after him for delayed instalments.

Another driver, Suresh Uppdhyay , said he does not know how to repay his debts. Previously he earned around Rs 700 to 800 daily, but now hardly pockets Rs 200 to Rs 250 after deducting the fuel charges.

"The CNG price hike increased our operational cost by at least by 25 percent, while the 'work from home ' culture reduced number of passengers by almost 50 percent now," said Upadhyay, who has already started looking for another job to supplement the income fall, but has not got any positive response. In last 12 months, CNG price increased by around Rs 14 per kg in the MMR.

Surviving because father is working

"Now its become very tough to even feed the family. Before pandemic I was earning around Rs 20000 per month , but now its down by 50 percent which not enough to pay the monthly bills of grocery. Hence force to cut my daily expenses including toys and chocolates for my around 4 years old daughter. Even am not able to gift dress to my wife and mother on the occasion of new year" said Atul Shrippati Damle, 28 years old taxi driver who is operating taxi in the city since last 7 years. Basically from Satara, Maharashtra Atul living with his 50 year old father ( working in BEST) 49 years old mother (house wife) and 25 years old brother in Byculla. "In current scenario for a taxi driver it not possible to survive in Mumbai with family" said Atul graduates from Mumbai university adding that now i am surviving in Mumbai with family because my father helping allots.

Post graduate (MA in Political Science) from TD collage of Jaunpur (Uttar Pradesh) Achchhelal Yadav (48) dreams once again shattered. His two sons one is 22 and other 24 preparing for Civil services exam in Allahabad. "Before pandemic I used to send Rs 12000 every month for them but since last two months unable to send them single penny," said Yadav who is operating taxi in the city since last years. "Now both sons are looking for some job " Yadav said adding that now before pandemic he was dreaming that after both sons get decent job in government sector he will leave settled in his Village. Earlier he easily earned around Rs 25000 per month but now he hardly able to earn around 5000 to 6000 per months which is not sufficient for his personal expenses i.e. house rent and grocery. According to Yadav because of COVID restrictions on average daily number of passengers gone down by more than 50 percent.

Force to settle family in village

Vinod Yadav (39) who runs taxi since 2003 in Mumbai said, before pandemic he used to live in Virar with 38 year old wife and three children's including two sons age 14 and 12 year and one daughter age 7 years old. All three children's were studying in English medium schools of Virar, but due to drastic down fall in income he forced to settle them in his village of Kodarma district of Jharkhand. " Currently I am living in Goregaon with three friends and hardly able to send Rs 2000 per month to my wife " said Vinod Yadav who is now eagerly looking for some other job in Mumbai. "Earlier daily fuel expenses was around Rs 400 which is now gone up to Rs 550 per day, because for the search of passengers I need to empty taxi around 20 to 25 km daily, which increased operation cost by around Rs 150 daily" said Yadav.

Struggling to met education expenses of his younger son

Seventy year old Mohammad Sayeed, who runs taxi since last 35 year said, "I settled my three sons and one daughter through this job, but now struggling for paying education fee for 18 year years old younger son." According to Sayeed, in last two months CNG price gone up by around Rs 7, leads to increase operations cost around 15 percent. Earlier his operation cost ( including vehicle rent) was Rs 600 but now its goes up to over Rs 700 . Before pandemic Sayeed's daily on average empty run (for the search of passengers) was around 15 km which is now gone up to over 25 km daily. Earlier on average he carried 38 to 40 passengers (trip) but now he is hardly getting 15 to 17 passengers ( trip) daily because of work from home cultures.

Looking customer for his rickshaw

Bhagirath Yadav (28) year old rickshaw drivers from Santacruz looking customers for his two years old vehicles. "I purchased rickshaw in December 2019 on loan , but due to pandemic I am unable to pay monthly instalments hence decided to sale the rickshaw" said Bhagirath adding that job of security guard is much better that plying rickshaw in current scenario. 10th pass Bhagirath living with his father in Santacruz, his father working as a security gaurd with a private firm . He sent his mother, wife and both children's ( sons 7 year daughter 3 year) Pratapgarh Up in June 2021. According to Bhagirath Rs 1.12 lakh loan for his vehicle is still under paid. He is getting continuous call from the recovery agent. Now he completely lost his hope. Hence decided to sale his vehicle to repay loan. “Now it has become very tough to even feed the family. Before the pandemic, I was earning around Rs 20,000 per month, but now its down attem50 percent which not enough even to pay my monthly groceries. So I am forced to cut down on my daily expenses including toys and chocolates for my four year old daughter. I could not gift new clothes my wife and mother this New Year.” "My two sons – elder is 24 and younger is 22 -- are preparing for civil services exams in Allahabad. I used to send Rs 12,000 every month for them, but since last two months, I am unable to send them a single penny. Now both sons are looking for some job.” “My three children were studying in English medium school in Virar, but now due to the drastic fall in my income, I am forced to send them to my native village in Kodarma district, Jharkhand.” "It was taxi line that helped me settle down my my three sons and one daughter, but now I struggling for pay even the education fee for my 18 year old younger son." 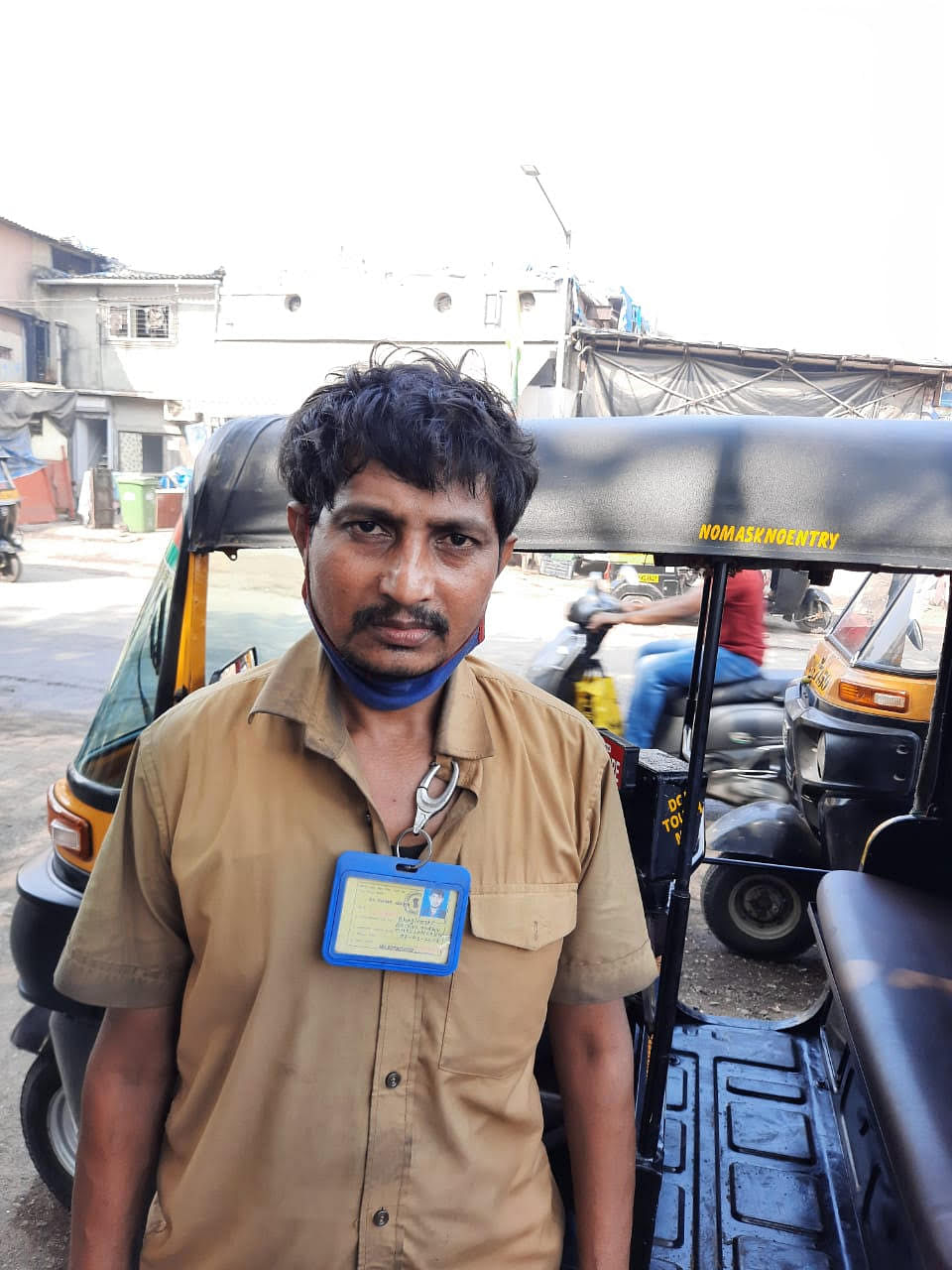 “I bought my own autorickshaw with a vehicle loan in 2019, but now I am unable to pay even the monthly instalments. The recovery agents have started calling me continously as Rs 1.12 lakh loan is still unpaid. I have no choice but to sell the auto now.”