HomeMumbaiMumbai: City's first 'Restaurant on Wheels' to come up in vicinity of CSMT; all you need to know

Mumbai: City's first 'Restaurant on Wheels' to come up in vicinity of CSMT; all you need to know

The Indian Railways has long had its Palace on Wheels. Now, Mumbaikars can get ready to dine at ‘Restaurant on Wheels’. The railways has recycled its old coaches to create a state-of-the-art restaurant, laden with vegetarian and non-vegetarian fare and will welcome patrons from the first week of October.

The first such Restaurant on Wheels, called Bogie Wogie, will come up in the vicinity of the CSMT. The interiors of the first restaurant are 70 per cent done and will be located in the non-ticketing area, so that patrons don’t have to buy a platform ticket to access the restaurant.

“Almost 70 per cent of the work is complete, the rest will also be completed by the end of this month. It is likely to start functioning in the first week of October 2021,” said a senior Central Railways official. “Our restaurant is a bogie that helps you ‘travel’ across cuisines in a modern, yet rustic ambience,” the official said.

The bogie will be surrounded by lush green lawns. “This project is like a dream come true, with the entire train bogie being converted into a restaurant,” said a senior official who is supervising the project. “Colours in a restaurant create a powerful impact on customer experience, which help to enhance mood and crave good food,” he added.

“The aim of starting such a restaurant is to offer people the experience of eating on wheels to the users, as well as to generate revenue for railways,” said Senior Public Relations Officer of Central Railway Anil Kumar Jain, adding that it would be the first such restaurant of its kind in the city.

The effort is likely to generate a revenue of approximately Rs 41 lakh in the next few years for the Central Railway.

Asked about the facilities, officials said the restaurant would have two sections; in the first one, beverages and other items would be sold. In the second part, a variety of cuisines will be available.”

“The motto is to serve happiness to customers through delicious, quality meals and extraordinary restaurant experience which takes inspiration from the shape and look of the bogie itself but at the same time adds colour to bring more playfulness to the space and make it more inviting for families,” said the designer of the railway restaurant. 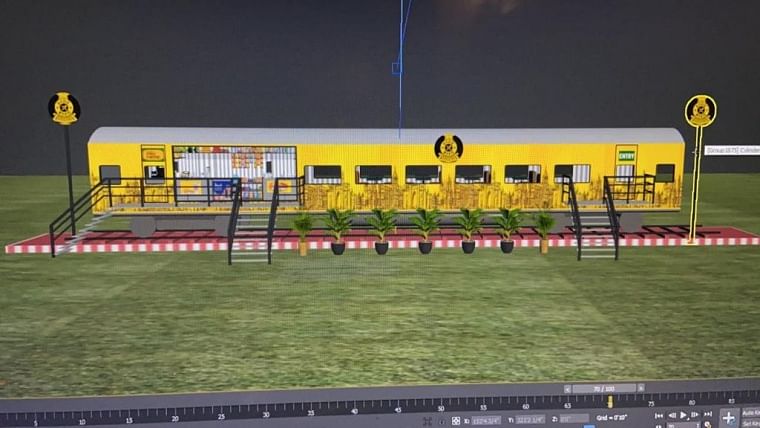 Earlier, Central Railway’s Mumbai Division had floated a tender to set up a ‘Restaurant on Wheels’ at the CSMT station’s circulating area at the entrance of Platform Number 18 near Heritage Gully, adjacent to P D’Mello Road in the beginning of this year.

“The coach has been placed alongside the heritage gully at the entrance of the CSMT and the construction / interior work is under process, likely to be completed by end of this month and start functioning by the first week of October 2021,” said CR officials.

The interior of the restaurant has an Indian Railways theme and is being designed by a renowned architect of Mumbai hired by the licensee. It is expected that passengers, as well as the public will enjoy the experience of dining in a rail-themed setting.

There is ample parking space, apart from easy connectivity to the suburbs via the Freeway. The fine-dining place can accommodate 40 patrons inside the coach, at any given time.