With roadside food stalls prohibited during the lockdown and fewer people venturing out of their homes fearing Covid-19 infection, there has been a steep decline in cases of these ailments.

In Mumbai, absence of street food stalls and many keeping away from street food during lockdown has resulted in a drastic decline in reported cases of monsoon ailments and water-borne diseases associated with the stomach and liver, like gastroenteritis and hepatitis.

Every year during the monsoon, hospitals in the city witnessed a spike in the number of patients coming in with stomach flu or gastroenteritis and hepatitis. With roadside food stalls prohibited during the lockdown and fewer people venturing out of their homes fearing Covid-19 infection, there has been a steep decline in cases of these ailments.

Gastroenteritis and hepatitis A or E are caused by contaminated water or food. Symptoms take three to six weeks to show.

"This year, due to pandemic induced lockdown, we had expected fewer cases of water-borne diseases or monsoon related ailment as we commonly called it. But the decline in the number of cases reported between January to November has been much higher than we expected. Roadside food stalls are the primary source of infection for contraction such diseases,” said an official from BMC's Public health department.

Doctors said hepatitis A and E can also spread due to improper hygiene, especially if uncooked food — like fruits and vegetables — are washed with contaminated water. The official added, "With everyone taking extra precautions to curb the spread of Covid-19, the risk of contaminated water has also diminished. Since the pandemic hit the city, people have been drinking boiled water and washing their hands frequently, washing fruits and vegetables thoroughly. This too became a factor that brought down the cases of monsoon related infections drastically."

The civic officials pointed out that the number of cases of water-borne diseases is declining every year since 2015. Officials have attributed this to quality water supplied across the city by the Mumbai civic body. 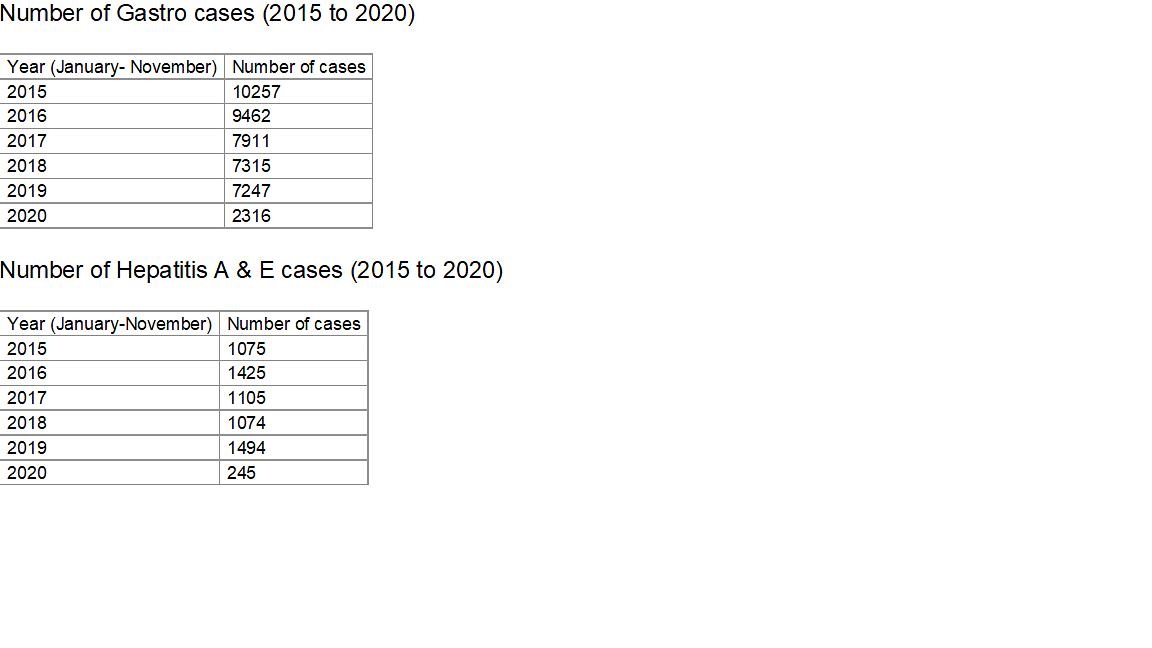 "Providing uninterrupted and good quality drinking water is our priority. We do not compromise with the quality of water that is supplied across all households in Mumbai. This has also led to minimising the incidence of water-borne diseases in the city," the official added.