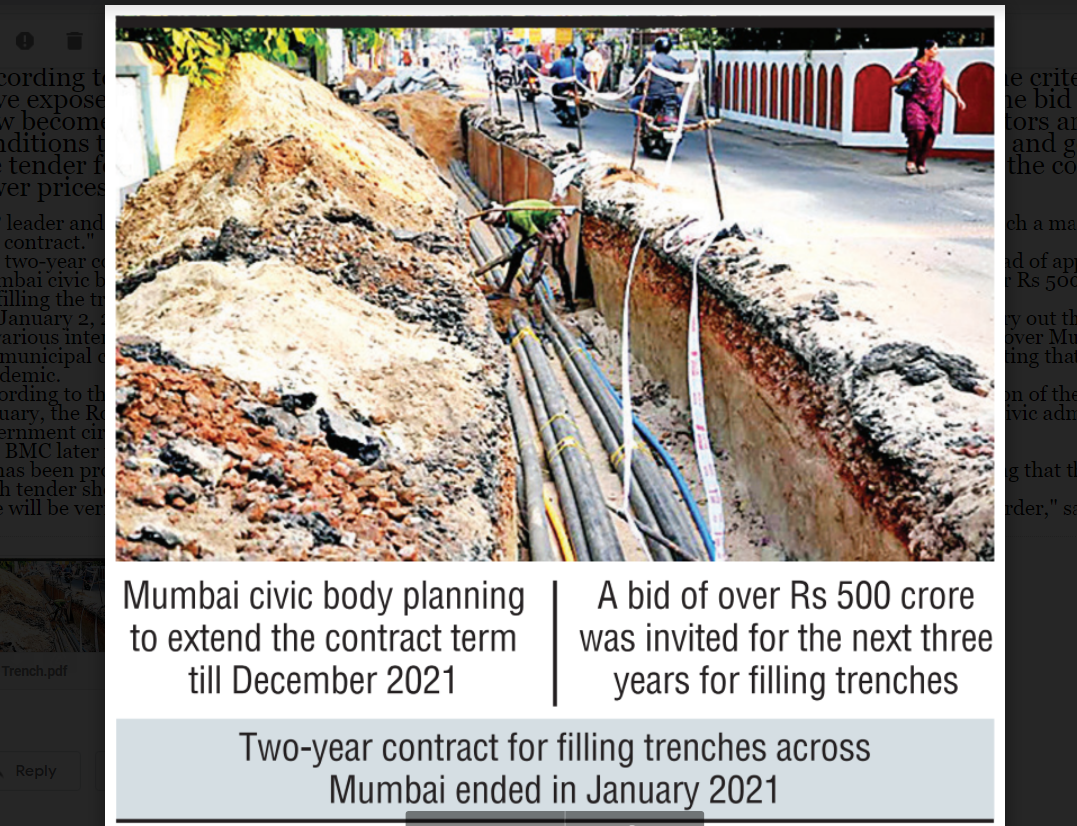 MUMBAI: Senior BJP leaders and BMC Corporators have come together against the ruling Shiv Sena, alleging that there is a multi-crore scam in a trench bid opened by the civic body on Thursday. The matter came to light when the bidders shortlisted for the tender floated by the BMC turned out to be the same who the BJP corporators had named as the cartel of contractors that have been favoured by the Shiv Sena, even before the bids were opened on Thursday.

The civic administration in turn said it would verify the allegations levelled by BJP, before finalising the contract.

Earlier this month, BMC had floated a tender for appointing seven different contractors to reinstate utility trenches across seven municipal zones. A day before the bidding was opened, BJP corporator from Kurar Village Malad Vinod Mishra wrote to the municipal commissioner Iqbal Singh Chahal and Mumbai Mayor Kishori Pednekar informing that the process of awarding the tenders was rigged and the companies who will be awarded the contract are fixed.

Claiming this, Mishra even submitted the list of seven companies/ contractors who he claimed will be bagging the contract for filling the trenches.

According to Mishra, there are only around 14 such companies that were able to meet the criteria of the tender. He added, "We have exposed how this nexus works. The list of companies that I revealed a day before the bid opened came out the next day. It now becomes certain how this nexus of the ruling party, a few civic officials and contractors are amending the tender conditions to make sure that members of the alleged contractor lobby fit into the mould and get the contract. He claimed that the tender for carrying out trenching works was first floated in September. However, as the contractors quoted 25-30 per cent lower prices than the estimated ones, the tender was then cancelled."

BJP leader and former corporator from Ghatkopar Pravin Chedda said, "The tender conditions are tweaked in such a manner that the same companies can bid for this contract."

The two-year contract for filling trenches dug for installing utilities across Mumbai ended in January 2021, instead of appointing new contractors for the work, the Mumbai civic body was planning to extend the contract term till December 2021. On the other hand, a bid of over Rs 500 crore was invited for the next three years for filling the trenches.

On January 2, 2019, the BMC Standing Committee approved the appointment of contractors for two years to carry out the work of installing underground utilities by various internal and external utility service organisations in Mumbai. However, the contractors appointed all over Mumbai had submitted a joint statement to the municipal commissioner requesting him to extend the contract period for the work till December 31, 2021, citing that the work was hit due to the covid19 pandemic.

According to the previous contract, the term expired on January 29, 2021. It is noteworthy that with the expiration of the contract for digging the trenches in January, the Roads Department had tried to invite tenders in 2020. But the previous contractors had urged the civic administration to give an extension based on a government circular for Covid affected work.

The BMC later floated another tender for the same project at an estimated price of Rs 550 crores.

“It has been proven that the whole thing was pre-decided and how corrupt the system is,” said Mishra, demanding that the entire tender process be cancelled and a fresh tender should be floated.

"We will be verifying all the allegations made by BJP corporators before finalising the contract and giving work order," said a senior BMC official.