The numbers picked up but many felt that they didn't match up to the fierce competitive spirit on display before the pandemic struck.

Celebrated after a two-year Covid hiatus, the Dahi Hndi festival saw an enthusiastic lot of Govindas but a lesser crowd of onlookers in the city. Heartlands of Govinda's activity saw both Pathaks and the crowd showing up late. The numbers picked up but many felt that they didn't match up to the fierce competitive spirit on display before the pandemic struck.

Lesser pomp and boasting of prize money, a split in the Shiv Sena and festivities moving to Thane were the guesses some made for the unexpected drop in revelry. “There is a lot of enthusiasm but you don't hear the loud music and large crowd that the festival brought until a few years ago. There aren't even enough Handis this time," said Arun More, a shopkeeper from Tadwadi. Whereas, Arun Bagkar had a contrasting view. “There is a lot of enthusiasm. Only many people go to other parts and hence you do not see a lot of them here,” he said.

MNS leader Bala Nandgaonkar, who kept an Rs five lakh prize for a nine-tier pyramid and Rs 10 lakh for a 10-tier, asserted that huge price amounts were announced earlier due to fear of anti-tax evasion agencies. This time, prize money ranged from Rs 21 lakh to Rs 51 lakh in Thane.

But money was not that excited most Govinda Pathaks. “We come here for the fun of it. We are not here for money or any record. We just look to be a part of our festival,” said Sonali Shingate of Shiv Shakti Mahila Sangh that made a five-tier pyramid in several places.

An elaborate itinerary was prepared by many Govinda who took trucks, cars and bikes to reach the venues. “We will go to 12 places in all,” said Navnath Patil of New Parshuram Govinda Pathak, which made the eight-tier pyramid. Many Govinda Pathaks that made pyramids had boys that did not look more than 14 years old. But, Govinda Pathaks vouched for their age and claimed that they had shown Aadhaar cards before attempting to form pyramids. All had a safety head-gear and jacket, while those going for seven and above would have their top participant tied to a harness.

In Dadar, a Pathak made a different show for the top slot. Dressed as Shivaji Maharaj, he competed against a challenger who played the role of Afzal Khan. Foreigners in the city were excited to witness the fanfare.

Keitavo and Kana Takata from Japan took a number of pictures of the pyramids and people at Jambori Maidan. “We are really enjoying this. We don't see anything like this in our country. There are more layers made here which makes the process very exciting," said Keitavo, who had seen the seven-tier pyramid to his amazement.

Jambori Maidan was a place of one-upmanship between the Shiv Sena and BJP. In a number of places, the BJP had organised Pathaks and put up banners in areas considered Sena heartland. These places included Fer Bandar, Worli, Parel and Elphinstone. In a tit-for-tat, Sena made a show of strength at Tardeo, Elpinstone and Dadar. 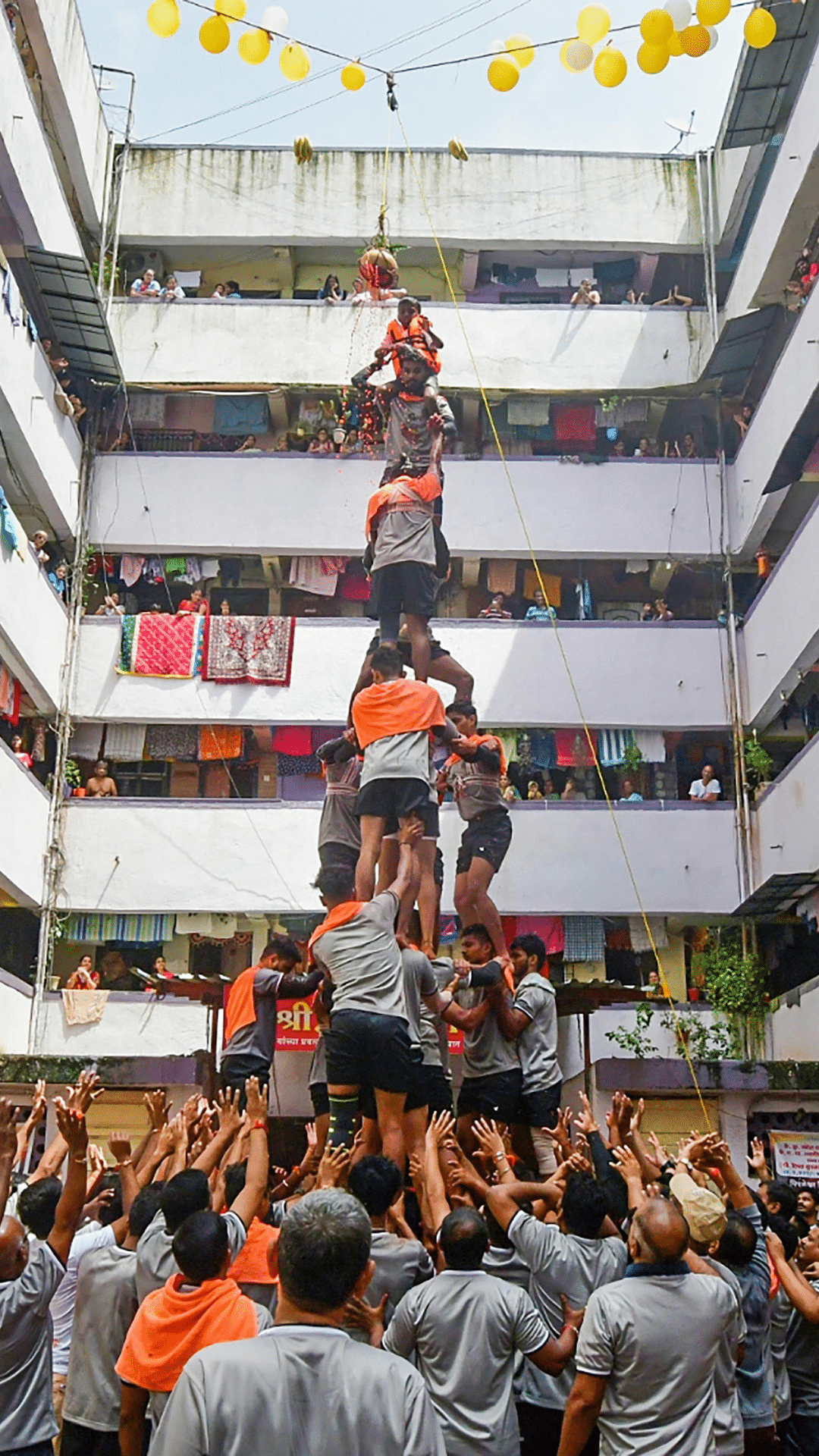