For all those who are fully vaccinated and have bought monthly season tickets (MST) from the railways, don’t forget to carry a physical copy of the vaccine certificate stamped by the Brihanmumbai Municipal Corporation (BMC) helpdesk, or else, face the consequences. On September 7, a 28-year-old Worli resident was given a tough time by the ticket checking staff for forgetting to carry the physical copy of the BMC stamped vaccine certificate with him and having just a soft copy (photograph of the hard copy).

The incident happened at Andheri station at around 7pm when Siddhant Worlikar was returning from his workplace. When he entered the station premises, the ticket checking staff was checking passengers’ valid MSTs and tickets. When Worlikar was asked for his ticket/ pass, he showed it to them.

“They then asked if I was on essential duty. I replied that I had bought the MST after double vaccination and that I had the soft copy of the vaccine certificate stamped by the BMC. However, they spoke to me arrogantly and were not ready to see the soft copy of either the Universal E-pass or Vaccine Certificate,” said Worlikar, who travels by train from Dadar to Andheri and has just recently changed jobs. 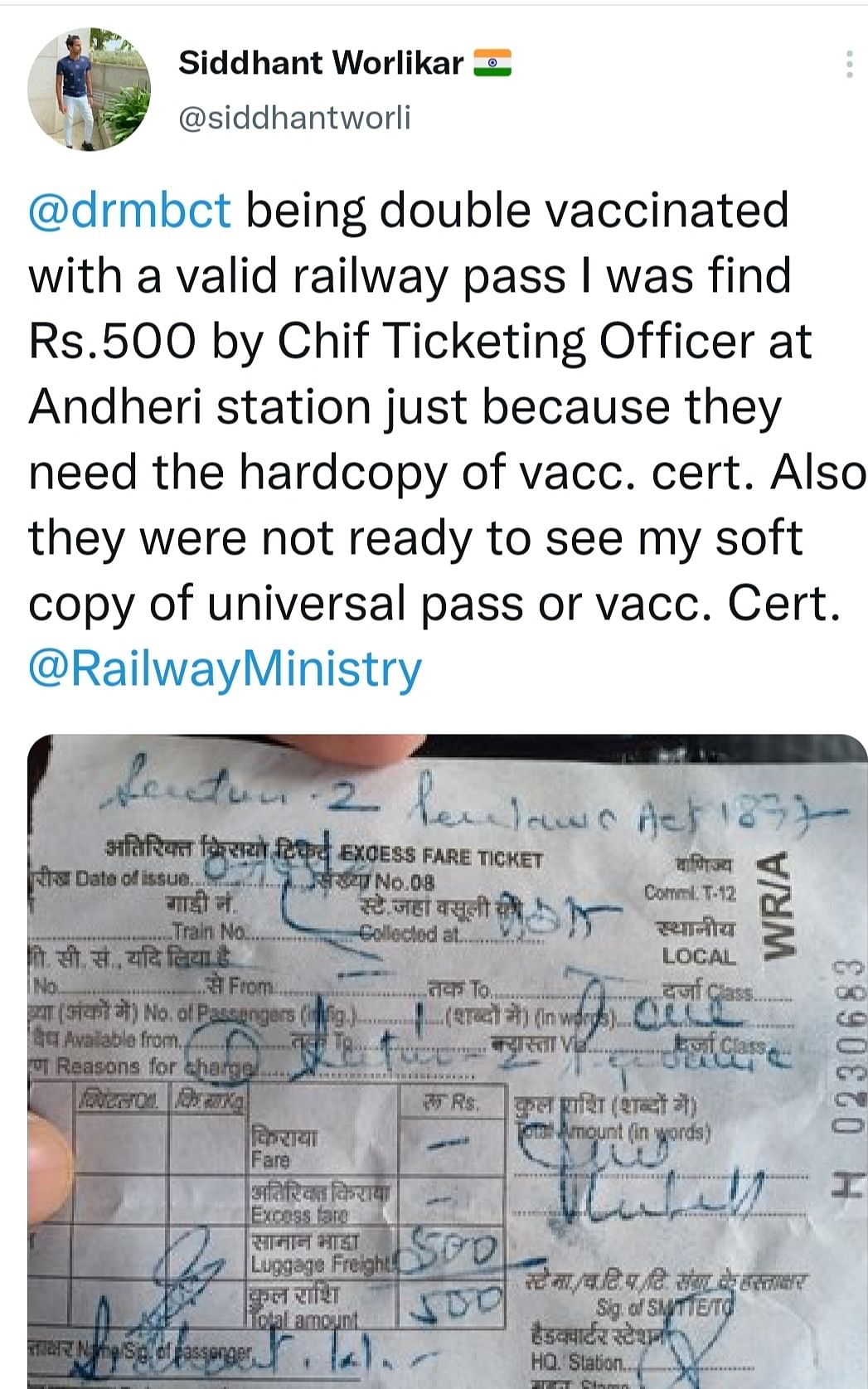 Soon, railway police joined the ticket checking staff, claimed Worlikar and said they were demanding fines of Rs 1,700 or so and he was afraid of being put behind bars. He ended up paying a fine of Rs 500 for the same. “When I had asked the BMC staff sitting on helpdesk, they had said carrying a soft copy of the vaccine certificate would be sufficient,” he said.

He later took to Twitter to recount the incident. “@drmbct being double vaccinated with a valid railway pass I was find Rs.500 by Chif Ticketing Officer at Andheri station just because they need the hardcopy of vacc. cert. Also they were not ready to see my soft copy of universal pass or vaccination Certificate @RailwayMinistry https://t.co/jkAfyB5O0r. Date 7th sep 21 at 7pm. Also they were abusing and threatening to file a case or lockup if not payed. According to @mybmc hard copy is only for those who can’t access phone. They also took my phone and kept on the table and we’re abusing when I asked for my phone,” tweeted Worlikar.

Meanwhile, Western Railway officials have said that they are investigating the matter based on this complaint. “We are still looking into all aspects of the investigation and cannot comment any further. All those who have bought MSTs after physically verifying the vaccine certificates at BMC’s helpdesk setup at railway stations, will have to carry a physical copy of the vaccine certificate as well,” said a WR official.

Sources in WR said that one of the points that had emerged was that the pass issued to Worlikar at the ticket counter mentioned that he (Worlikar) was on Essential Duty.

Since August 11, when the state government, BMC and Railways started the process of issuing MSTs to those who are fully vaccinated, the number of daily passengers has touched 30 lakhs on an average, on both Central and Western Railways as on August 31.