In his speech, CM Uddhav Thackeray took friendly jibes at Fadnavis, now sitting in the opposition benches, and said: "I have never proclaimed that 'Mee ithe yaeen' (I will come here), but by fateful circumstance, I have come here (as the CM)."
Quaid Najmi 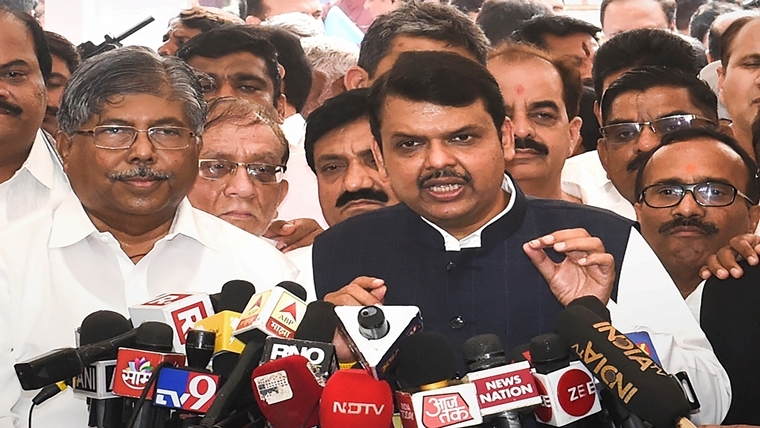 Former CM and opposition leader Devendra Fadnavis speaks to media outside the State Assembly during the floor test, in Mumbai, Saturday, Nov. 30, 2019. | Photo by PTI

In his speech, CM Uddhav Thackeray took friendly jibes at Fadnavis, now sitting in the opposition benches, and said: "I have never proclaimed that 'Mee ithe yaeen' (I will come here), but by fateful circumstance, I have come here (as the CM)."

"Fadnavisji, we were frie­nds once and shall always remain so... I have learnt a lot from you. But, in your past 5 years as CM, I never betrayed you or created any obstacles in your work. But, if we had been together, then I would have been watching today's proceedings live on TV at home!" Thackeray said, broadly suggest­ing allying with BJP again would have been disastrous for Sena.

NCP leader and Minister Jayant Patil also took a few digs at Fadnavis, saying: "He had promi­sed 'Mee punha yaeen', but never indicated where he would be 'sitting'. Now for the next 5 years, you don't make any attempts to come this side (ruling). So, your appointment as Leader of the Opposition is quite apt." He called how in 2014, the BJP legislators had elected Fadnavis as the CM, but this time, the very same BJP MLAs had chosen Fadn­avis over Radhakrishna Vikhe-Patil (the former Congress leader of opposition, now with BJP).

"Vikhe-Patil is still our man... There's no distance between... We can pull him back," Patil said in a veiled hint that many former Congress-NCP leaders who had left to join the BJP could make a 'ghar-wapsi' and further truncate the BJP. Replying to the caustic felicitations that had members on both sides in splits several times, Fadnavis said that though he had forecast he would return, he had not indicated any time frame for it, implying he could bid for power again, and the ruling Sena-NCP-Congress beware!

"I thank you all, and Uddhavji. Most people made nice speeches about me here. But, some of their statements reminded me of the (Amitabh Bachchan-Mausi's) dialogue in 'Sholay' film — "Ladka to accha hai, par". Those who were in the opposition once, they are now in the government. But, such things keep happening in a democracy," he said.

Despite the fiasco of an 80-hour two-member govt, Fadnavis reite­ra­ted his intention to return to po­wer again, but this time with a slight poetic twist in the tale: "Th­at's why I had said 'Mee punha yaeen'... 'Mera paani utarta dekh, kinare pe ghar mat banao, Main samunar hoon, lautkar zaroor aao­nga' (Don't build your homes on the shore seeing the receding wa­ters; I am an ocean, I will return).”

Addressing Patil's specific jibes, Fadnavis said if the Maha Vikas Aghadi (MVA) functions in the interests of people of the state, the opposition would always support it unflinchingly.

However, if the government failed to function and fulfil the public aspirations, then he warned that the opposition would not think twice before toppling it.

All the good-natured humour and banter on both sides came to end as it was time for governor BS Koshyari to deliver his address to the maiden sitting of the legislature later this evening, preceded by the unopposed election of Congress leader Nana F Patole as the speaker and later Fadnavis in his new post.